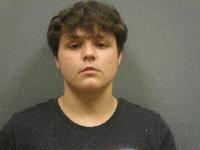 According to the arrest affidavit, Quincy Lyon met the girl on Snapchat in January. They spent time together with the girl’s family in Lincoln County and later they had sexual intercourse three times in other locations.

The girl talked to investigators at the Bridge of Hope Advocacy Center in North Platte, and in March, Lyon agreed to speak with Nebraska State Patrol investigators, the affidavit says. Lyon told investigators that the girl told him she was 17. His version of events was inconsistent, according to the affidavit.

Lyon was apprehended on July 29. His bond was set Monday at $200,000. He faces up to 20 years in prison if he is convicted of second-degree sexual assault.

According to Nebraska statutes, a person commits sexual assault of a child in the second or third degree if he or she subjects another person 14 years of age or younger to sexual contact and the actor is at least 19 years of age or older.