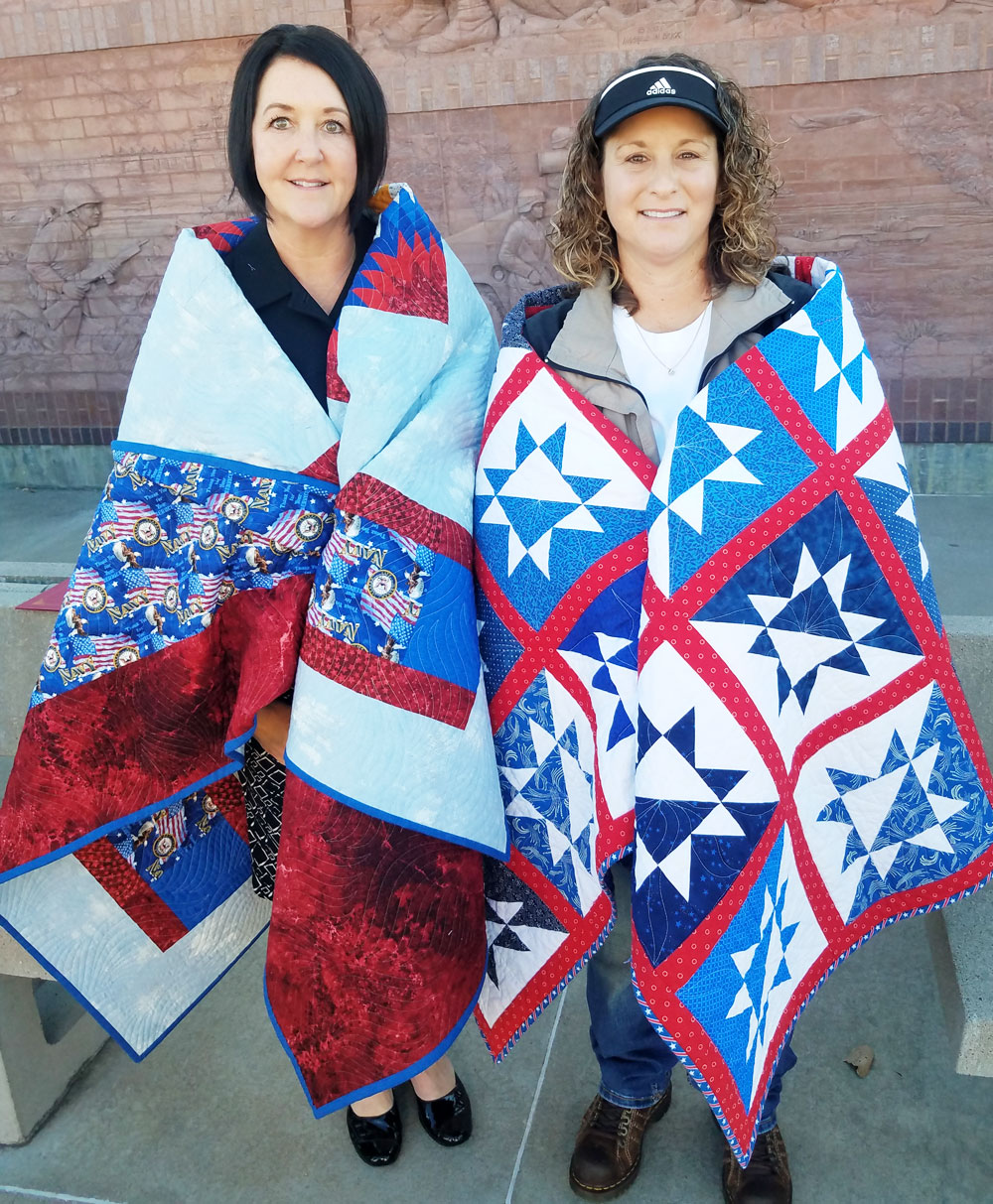 The women became the 65th and 66th veterans to receive the warm, heavy, handmade quilts from the Heartland chapter. The quilts were presented at the 20th Century Veterans Memorial in North Platte, with U.S. flags lining the memorial wall, carried by members of the Patriot Guard and the American Legion Riders.

The quilts are made in three layers and meant to provide comfort and show the gratitude of countrymen for the veterans’ service, sacrifice and valor.

Family and friends congratulated the veterans and took the opportunity to record the occasion with photographs.

Eight more quilts will be presented in North Platte on Veterans Day in ceremonies at the same location. The ceremony begins at 2 p.m.

Anyone interested in nominating a veteran for a quilt can do so at www.qovf.org/nominations-awards

If you would like to play a part in North Platte’s branch of the Quilts of Valor Foundation, contact Chris Reinert at creinert1@charter.net for volunteer opportunities.

The Lincoln County quilters presented their first quilts on Veterans Day 2019. The chapter was recently recognized by Lincoln, Neb. chapter as the most active in Nebraska.

Pam Elliot is a native of Maxwell and nearly all her siblings live in the North Platte area.

She enlisted in the Navy in 1985 and served six years of active duty has a parachute rigger. Among many other assignments during her 35 year military career in both active and reserve duties, she was an executive officer of the deputy assistant secretary of the Navy – acquisition and procurement at the Pentagon. She holds a masters of business administration degree from National University.

Among her military decorations, she holds a joint serevice commendation medal in the Navy and Marine Corps. She currently lives in Colorado Springs and works for the Department of Homeland Security, cybersecurity infrastructure acquisition and financial management.

Elliot was nominated by her cousins, Margaret Ahola and Joey Dinapoli of Lincoln. She presented two bouquets of flowers to the Heatland chapter to thank them.

Stacy (Mathers) Iske was born and raised in North Platte. She enlisted in the Army reserves in high school in 1989 and was assigned to the 1013th Quartermasters. She completed basic training in 1990 and served 23 years in the reserves, active duty and Guard and Reserves. She earned a multitude of medals and ribbons, including the Meritorious Service Medal, National Defense Service Medal with Bronze Star Device and Expert Rifle Badge.

She served both in the U.S. and abroad, including a three-month assignment in Jordan in support of the war in Iraq. A year later, she became a career counselor for soldiers in the North Platte and McCook area, a position she held for six years. She was promoted to the rank of Master Sargent in 2012 but had to decline due to her retirement.

Others cannot judge what being touched by war means to individual veterans, said Chris Reinert of the Heartland Quilters and she announced the awards.

“We are privileged to recognize your service,” Reinert said.

(Tap on photos to enlarge.)