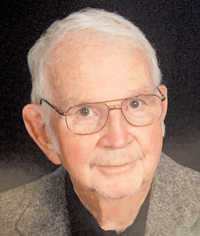 He was born on March 9, 1935 to Henry and Juanita (Starling) Padgett in Chiefland, Fla.

Willie graduated from Wesminster High School in Denver with the class of 1953. He entered the United States Marines on Dec. 29, 1953 and served stateside. After his discharge in 1956, Willie went back to Denver. He married Vauni Powell and to this union three children were born, Frederick, Darrin, and Lynette Padgett.

On March 2, 1979 Willie married Margaret (Greivel) Parker at St. Anthony’s Catholic Church in Julsesburg, Colo. The couple lived in Ogallala and Willie worked as meat market manager at Safeway in Ogallala. He worked at Hatch’s Super Food in Grant and retired in 2016. They moved to North Platte in 2017.

The family would like to extend their gratitude for the excellent care by the Linden Court Staff. Also, for the loving care of Willie by Dr. Eduardo Freitas.

Christian Wake Services will be held at 10 a.m. and Mass of Christian Burial will be held at 11 a.m., Thursday, July 22 at St. Patrick’s Catholic Church with Rev. Josh Baker, Rev. Bryan Ernest, and Deacon Eric Parker officiating. Inurnment will follow at Fort McPherson National Cemetery near Maxwell. Those wishing to sign the book may do so noon-5 p.m., Wednesday July 21 at Adams & Swanson Funeral Home, which is in charge of arrangements.

Memorials are suggested in his memory to St. Patrick’s Catholic Church. Online condolences may be shared at adamsswanson.com.