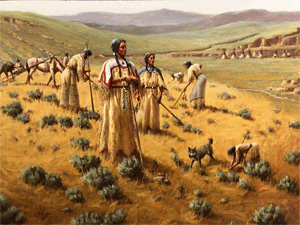 North Platte native and nationally known artist, Ted Long (1932-2007), is recognized as one of the foremost western artists in the country.

The Prairie Arts Center is paying more attention to Long than normal during January, where visitors can explore a Lifetime of Long’s work.

Long was energized by his love of the outdoors and the beautiful rustic surroundings of his North Platte studio. He dedicated his life to accurately portraying the legacy of the Old West, before he passed away at his home in 2007.

Actor John Wayne purchased Monarch of the Plains, a sculpture that depicts a buffalo attacking a pair of Native Americans on horseback. Wayne placed a single stipulation on the purchase: Long must deliver it in person to Wayne’s residence in California.

In 1987, Long presented President Ronald Reagan with The Last Farewell, a bronze of Buffalo Bill Cody.

Long’s sketches, oil paintings and bronze sculptures tell a story about his passion for nature, history and the West.

While visiting the gallery, check out the Ted Long Legacy room on PAC’s third floor. The room is designed after Long’s studio, an old log cabin like his great grandfather homesteaded in the 1800s.

North Platte native and nationally known artist, Ted Long (1932-2007), is recognized as one of the foremost western artists in the country.

We invite you to see for yourself.

The exhibit is sponsored by Sandhill Private Banking, a division of Sandhills State Bank.