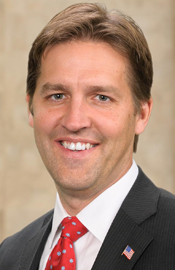 In reply to critical Nebraska Republicans, Sen. Ben Sasse says he consistently casts conservative votes, and it is not wrong to criticize “one guy” – former President Donald Trump.

Sasse has been censured by some county Republican groups in Nebraska, including Lincoln and Keith County groups, and they are looking for a statewide party censure.

The county censures will be presented at the state GOP Central Committee meeting on Feb. 27.

“Something has definitely changed over the last four years…but it’s not me,” Sasse said in a video-taped reply. He said personality cults aren’t conservative. Neither are conspiracy theories, lies and acting like politics is a religion.

Sasse notes that on Nov. 3, he won the general election with more votes than any candidate in the history of Nebraska, winning all 93 counties for the second time, and receiving tens of thousands more votes than Donald Trump did in the state.

County Republicans have referred to a petition on change.org, which Sasse’s office says is open to anyone on the internet, not exclusively Nebraskans. A Sasse spokesman said there have been petition ‘drives’ outside of Nebraska and people have signed up multiple times.

In response to criticism that he does not reply to critical constituents, the Sasse spokesman said in the last year and change, Sasse has met with Nebraskans in every county and makes his constituent service operation a top priority, which is why he got so many votes in November.

Here’s a link to a video of Sasse’s response to the censure threats.