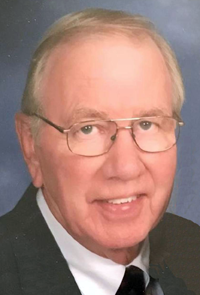 Ron grew up in Gothenburg, graduating from Gothenburg High School in 1957. He then attended Kearney State College for several years. On July 30, 1961, he married Sharon Stull in Gothenburg where he worked for Jobman’s laying carpet.

In 1964 they moved to North Platte where he worked for Ozzie’s as a carpet layer and then for Cohagen Transfer & Storage. They were blessed with four children: Tracey, Renea, Todd, and Patrick.

In 1977, Ron started his own business, Ron’s Cabinet and Remodel, beautifying homes in North Platte for 32 years. He retired in 2009.

He was a member of Messiah Lutheran Church. Ron was active in many organizations including the North Platte Jaycees, North Platte Homebuilders Association, North Platte Ambassadors, and was an active volunteer for Nebraskaland Days for many years.

He spent 53 years hunting deer with the SAARG hunting group that grew from a small group of friends with campers to then include their sons and grandchildren, needing a more permanent structure in the canyons south of Gothenburg.

Coming from a large extended family, many weekends were spent in Gothenburg and Brady enjoying family picnics, holidays, and celebrations. Ron loved his children and grandchildren immensely and was so proud of all of them.

As a carpenter, many people in North Platte and the surrounding area have the beautiful craftmanship of Ron’s work in their homes and businesses. He was a meticulous carpenter, taking great pride in his work.

Services will be held at 11 a.m. on Monday, Jan. 10 at First Lutheran Church with Rev. Patrick Sipes officiating. Burial will be held in the Gothenburg Cemetery. Visitation will be on Sunday, Jan. 9 from noon-6 p.m. at Adams & Swanson Funeral Home with family receiving friends from 4-6 p.m. Adams & Swanson Funeral Home is in charge of arrangements. The service will be live-streamed for those unable to attend.