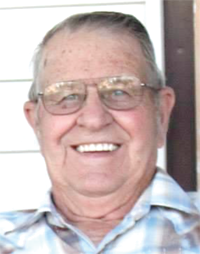 He was born April 6, 1937 in Mullen to Robert B. and Elsie A. Prentice. He attended high school in Mullen and graduated in 1956. He ranched on the original Prentice homestead north of Mullen and had a meat processing business for many years to supplement the family income.

On July 3, 1970, he married Bonnie L. Vargason, becoming a father to Allen Vargason. To this union were born two daughters, Melanie Lee in 1971, and Michele Lynn in 1973.

He leased the Fay Reigle ranch for several years and managed both places with long trips between the two with cattle and machinery.

In October 1995, the couple moved to Mullen and Robert worked at the COOP for fifteen years before retiring.

He was a wonderful, loving husband and father. He always made time to spend with family, and they enjoyed many fishing and camping trips. Many seasons of haying labor were made as a family unit as well. Some of Robert’s hobbies included making marble boards, playing cards, and he also volunteered as a guide for the Sharptail Shootout.

Robert thoroughly enjoyed having his numerous nieces and nephews to stay at the ranch. Robert was a very compassionate and humble man with high expectations. He was always concerned about others’ comfort and happiness before his own.

He is survived by his wife, Bonnie of Alliance; son, Allen and Nancy Vargason of Lincoln; daughter, Melanie and Mario Aguilera of Scott City, Kan.; daughter, Michele Prentice of Newcastle, Wyo.; nine grandchildren and nine great-grandchildren. He is also survived by his twin sisters, Mildred Szwanek of Mullen and Myra Fackler of Wellfleet.

He was preceded in death by his parents, three brothers, and one sister.

Graveside services will be held on Saturday, Sept. 24 at 2 p.m. MT at Cedarview Cemetery in Mullen, a luncheon for family and friends will be held prior to the service at noon MT at the Hooker County Ag Building located at the Fairgrounds in Mullen.