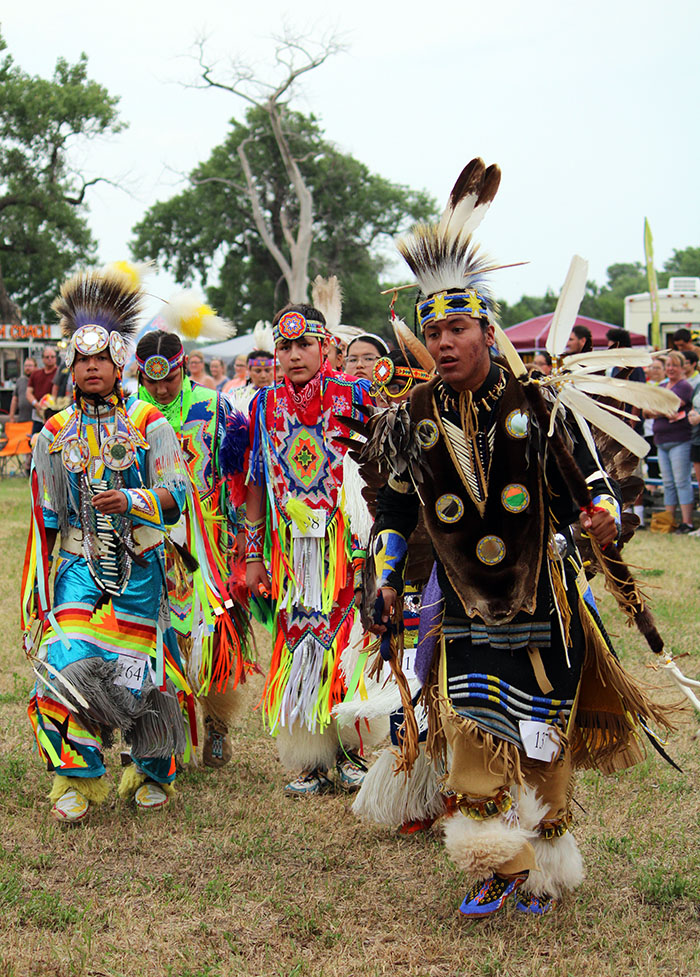 The first night of the North Platte Pow Wow kicked off Friday night at the Buffalo Bill State Historical Park, as spectators watched the Pow Wow competitors dance in honor of U.S. veterans.

In the Pow Wow’s second year in North Platte, the goal of the gathering was to honor U.S. veterans while sharing Native American culture through song and dance.

“What I’m trying to do here is support our active duty and veterans and make sure everybody knows that we wouldn’t be here without them,” Pow Wow organizer Char Swalberg said.

The event began with a Grand Entry that recognized the veterans in the crowd and the Pow Wow committee. Next was a series of inter-tribal dances, which later broke into individual dance competitions such as Men’s Fancy and Women’s Jingle.

More than 20 vendors from across the country sold food, merchandise, handcrafted beadwork, paintings, clothes and jewelry.

A portion of the proceeds will go towards Swalberg’s non-profit organization, Operation Christmas Card. Every year the organization sends care packages and Christmas cards to U.S. troops to give them a taste of home during the holiday season.

Swalberg began the non-profit after she sent her son a care package. He told her he was grateful for the package because not a lot of the other troops received something from home. His statement broke her heart, so she decided to reach out and gather donations for the project. From there the organization has grown and now sends around 300 care packages each Christmas season. This year, Swalberg is hoping to send 500 packages overseas.

“I have six kids and I just couldn’t bear to think of that,” Swalberg said. “A group of people in North Platte found out about it and they started collecting items and raising money and we sent out 16 care packages that first year and about 5,000 Christmas cards. This year, we’re trying to send 500 care packages out, so it’s roughly $35,000 that we need to raise in donations.”

In addition to honoring the troops, the Pow Wow shares a piece of the Native American culture with the community. Many of the singers and dancers involved in the gathering have been attending pow wows for most of their lives. Every summer season, they take to the road and travel around the country to compete and cheer on their families.

For Emmanuel Black Bear of Pine Ridge, S.D., this event serves as a way to gather with family and celebrate his heritage. As the head singer of his group, which is made up of his son and grandchildren, he leads the Pow Wow in song to provide competitors with music.

Black Bear has been singing and participating in Pow Wows since he was a teenager and has passed the tradition to his children.

“A lot of the people here really enjoy this way of life. It gives us something to do and there’s a lot of history,” he said.

Black Bear also hopes that, through the Pow Wow, more communities will be able to witness his culture and discourage some of the stereotypes held about Native Americans.

“There’s a lot of stereotypes of Native Americans and some of them aren’t good, but this is our natural way of life and it’s a beautiful way of life,” he said. “I think the more non-native people see us in that way, they’ll understand that we’re not all those stereotypes. This is a good eye opener for a lot of people.”

If you missed Friday’s festivities, more from the Pow Wow is to come in the next two days. On Saturday vendors will be available along with the first round of dancing which begins at 11 a.m. The Grand Entry is at 1 p.m. A second Grand Entry will be held at 7 p.m. where contest dancing will continue until 10 p.m. The following day, Sunday, will keep the same schedule with the addition of church services at 9:30 a.m. and conclude in the afternoon after prizes are awarded.

Photos by Sophia Walsh. Tap on images to enlarge