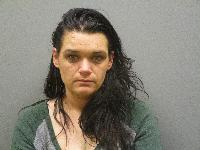 North Platte police made several meth arrests from Oct. 8-10 and they also arrested two people on other charges during that time, police spokesman Matt Elder said.

Here are the police arrest reports:

On Oct. 10 at 12:48 p.m., officers found a woman who is wanted on federal charges when they went to the area of Second and Willow to check out a vehicle that was reportedly driving erratically, carrying a screaming woman.

Officers were unable to find the vehicle but spoke with witnesses who said the vehicle drove off. They said a female had exited the vehicle and was now on foot, and they described her. Police found her a few blocks away and identified her as Pamela Edwards, 31.

In checking her record, they discovered that Edwards had a federal warrant for her arrest. She was taken into custody, and she is held at the Lincoln County jail for federal authorities.

On Oct. 10 at 3:15 p.m., police on patrol saw a man, identified as Derek Bissonette, 35, in a vehicle near Sixth and McCabe. They were aware that Bissonette was wanted on prior charges and they pulled the vehicle over.

He was taken in custody without trouble. In the process, police found a small baggie of suspected meth on him, leading to a search of the vehicle, where they found suspected meth as well as items commonly used to distribute narcotics.

After the investigation, the driver, Shelly Walkup, 39, was also placed under arrest, as well as a passenger, Kenneth Willard II, 28.  Walkup and Willard were both charged with meth possession. Bissonette was arrested on the previous warrant as well as meth possession with intent to distribute.

All of them were taken to the Lincoln County jail. Bissonette’s bond is set at $100,000, according to sheriff’s records. Walkup is held on a bond of $15,000. The bond amount for Willard is not readily available.

Upon arrival, they learned that Jessica Cole, 30, was inside. They made contact with her and took her into custody for two Lincoln County warrants as well as a warrant from Red Willow County. And, police also found suspected methamphetamine in her possession.

Cole was taken to the Lincoln County jail, where she is held on bonds totaling $50,000.

On Oct. 8, the police learned of an ongoing child abuse investigation by the department of Health and Human Services, wherein minor children were reportedly exposed to narcotics.

During the investigation, hair follicle samples were taken from the children and sent to the state crime lab for testing. The results indicated that the children had been exposed to meth.

Officers determined that the children had been in the care and custody of Jessica Araujo, 32, and probable cause was established to charge her with child abuse.

The next day, Oct. 9, police saw Araujo in a vehicle in the 500 block of S. Chestnut. They made contact and took her into custody. During the arrest, they found suspected meth and prescription pills in her possession, with no prescription.

Araujo was incarcerated at the Lincoln County jail, charged with child abuse, possession of a controlled substance and meth possession. She is held on bonds totaling $30,000.

On Oct. 8 at 11:51 a.m., police went to the 2400 block of N. Sheridan to check out a reported suspicious man on the caller’s property who had entered a camper.  When they arrived, the property owner allowed them access to the camper, where they found Aaron Hecksel, 35, hiding.