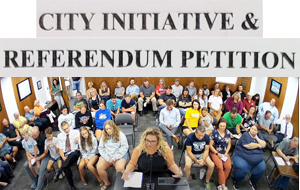 Petition forms moved out of the North Platte Chamber of Commerce office like hotcakes Friday morning, as organizers aim to force the city council to put a $60 million Recreation Center project on the ballot.

The council is at a stalemate on the issue.

Chamber of Commerce leaders enthusiastically support a half-cent city sales tax increase to overhaul the city Rec Center as well as the outdoor Cody Park pool and the skate park. Without enough funds from existing sources to pay the costs of construction, the approval of the voters is required to increase the tax and float a bond to pay for construction.

If the voters approve and the rec center is built, the North Platte school district has agreed to pay $36,000 a year toward the cost, said Leland Poppe, who chairs an alliance of 20 or so residents that came up with the plan. Developing the plan was a slow process that took six years or more.

More than 50 people attended the city council meeting Tuesday. Nearly all of those who spoke urged the council to let the voters decide the issue. Nevertheless, three councilmembers were unpersuaded. A fourth member, a conservative, was absent. Their objections centered around the high cost of the project with other needed projects looming for the city.

With the council deadlocked, the issue was tabled.

In less than a week the petitions were ready. Poppe said Attorney Brock Wurl of North Platte prepared the forms.

The petition drive relies on a rarely used state law by which 10% of the voters in the last city election can force the issue onto November ballot. Poppe said in this case, 1,050 valid signatures are required.

If signatures are collected in time and submitted to the governing body (the city council), “the governing body shall submit the question at the next primary, general, or special election,” according to the state statute (Nebraska Revised Statute 77-27,142.03.)

The signatures must be returned in time for the city council to officially advance the measure to the Lincoln County Election Office (county clerk) so the clerk can get it on the ballot. The statute says the clerk must have it at least 75 days before the election.

Poppe said that makes the final deadline Aug. 23. He wants to have the signatures collected by Aug. 16, in just 11 days.

If the number of carriers is an indication, the petition effort will likely succeed. Within the first two hours that the forms were available, 85 people picked up at least one form to circulate. Some took two, Chamber Vice President Cassie Condon said.

Each form has room for 20 signatures.

Councilman Ed Rieker told the Bulletin Friday morning that he wholeheartedly supports the petition process, although he does not support the ballot issue.

“This is the United States and we still have some liberties,” he said. “One is right to petition our government.”