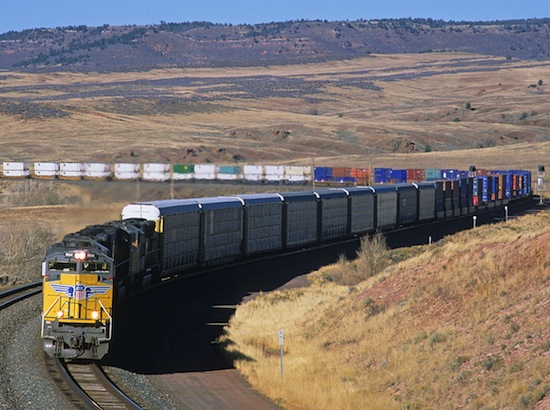 A UP freight train winds through the hills.

Union Pacific’s pilot plan is on hold that is aimed at taking conductors off freight trains, leaving only a locomotive engineer aboard.

The plan is grounded by objections from the union that represents conductors.

In a video released in late December, Union Pacific presented the plan. It started with a pilot program, comparing conductors aboard freight trains with what the company calls “ground-based expeditors.”

President Jeremy Ferguson of the Sheet Metal, Air, Rail and Transportation union has said if equipment failures occur on the line without a conductor available to act in a moment’s notice, it could be catastrophic, especially if the stalled train has an entire community blocked off.

SMART-TD General Chairman Luke Edington told the Bulletin Tuesday that changes in the current two-person crew must be agreed by management and the union. He said stalemated negotiations are under review by an arbitrator. If a proposed agreement comes out of that, changes would have to be ratified by union members.

UP maintains that the conductor’s job of repairing an enroute train would be better accomplished by a ground-based worker who drives to the place of the break-down in an equipped pickup truck. The truck would be dispatched from centralized locations and the conductor would avoid tedious train trips of unpredictable length.

UP says the company’s positive train controls (PTC), which includes an automatic braking system, eliminated most of the conductor’s duties during the trip. The conductor primarily prepares a train for departure and, if a breakdown occurs, addresses mechanical issues along the way.

The union points out that conductors help the engineer monitor track conditions and radio communications while ensuring that engineers remain alert.

In the case of a derailment or collision, conductors are the first to respond, before additional help arrives.

The engineer must remain with the train, but the conductor can get off and go to the scene of an accident.

The union also raises questions about whether an expeditor driving a truck would be able to reach a train in remote locations with no roads near the tracks.

And, in populated areas, a conductor in a pickup could get jammed in traffic.

Ferguson has pointed out an instance when a conductor got a three-year-old boy off the tracks before he was struck by the locomotive.

“Artificial intelligence absolutely has a role to play, but it cannot replace authentic human intelligence in railroading,” Ferguson told the Federal Railroad Agency in December.

So, the plan is on hold.

“There is no agreement in place on any territory under our jurisdiction on Union Pacific property to run such pilot program,” SMART-TD said in a Jan. 23 letter to state Sen. Mike Jacobson.

Regulators at both the state and federal levels are considering firm requirements for two-person crews on all over-the-rails freight trains. The proposal was one of Jacobson’s first actions as a state senator.

In a video presentation in December, UP said in the pilot program, the conductor would remain on the train and perform his or her role; documenting dates, times of service and how long it takes to perform activities. The expeditor would do the same from the ground. Management would compare the results and adjust as necessary, the company said.

But that won’t happen if proposed two-person requirements are enacted. And if they are not, changes would still have to be approved by the members of the union, Edington said.