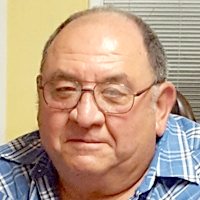 Lynn was born to Lawrence and Bernice (Trenary) Shaw on April 11, 1945 at Sutherland. He grew up north of Sutherland and graduated from Sutherland High School in 1963. In ’64 he joined the U.S. Navy and served in Vietnam.

Following his honorable discharge, Lynn came home to help his father on the ranch until he was injured a year later. Lynn eventually hired on with the Union Pacific Railroad, working as a carman until retiring in 2005.

Lynn was married to Virginia Armstrong and later to Joyce Kreachbaum. He was a father, stepfather and a grandpa to lots of kids. Lynn liked politics, loved our country, and proudly served on the Sutherland Honor Guard.

He was a member and elder of Hope Baptist Church and was a leader for Vacation Bible Study. He liked being a part of his bible study group and reading the bible to residents at the nursing home. He was also a member of the John Birch Society and Sutherland American Legion Otto V. Johnson Post #208. He enjoyed his coffee group and loved his family as well as his desserts.

He is survived by his son, Marvin Shaw of Sutherland; stepchildren, Russell (Tammy) Kreachbaum of Central City and Deanna Shaw of Omaha; sisters, Carolyn Gant of Sutherland and Ellen (Kim) Odean of Hershey; grandchildren, Skylar, Madison, Harlea, JanaBeth, Mikaela, Shelbie, and Jeremy; two great-grandchildren; special friends, Merlin and Kelle Dikeman of North Platte, and their family; as well as other family and friends.

Lynn was preceded in death by his parents, Lawrence and Bernice Shaw; and brother-in-law, Bill Gant.

Cremation was chosen. Memorial service will be 11 a.m. on Saturday, April 10 at Hope Baptist Church in Sutherland. Casual dress is requested. Inurnment with military honors will be on Friday, April 9 at 9:30 a.m. in Fort McPherson National Cemetery.

The memorial book may be signed at odeanchapel.com, at the services, or Friday from 10 a.m.-6 p.m. at Odean Colonial Chapel, which is in charge of arrangements. In lieu of flowers, memorials are to Hope Baptist Church.