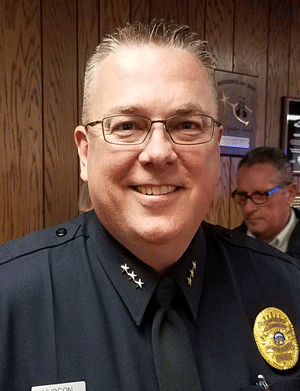 A surprising announcement came in the thick of the Nebraskaland Days celebrations. Police Chief Dan Hudson plans to retire in November, leaving the position he was hired to fill in 2018.

In the announcement from the city, a recruitment process was said to begin immediately to find a new chief, a process that is expected to take several months.

Hudson’s effective date of retirement is Nov. 2. That is three years and one month after he started the job.

Comments from top city officials were all positive. “Chief Hudson has always been upbeat and enthusiastic about the city organization and most notably his force. He will be sorely missed, but I know he is looking forward to the next chapter in his life,” City Administrator Matthew Kibbon said.

Kibbon told the Bulletin that Hudson will not receive a severance pay package. He will simply take his employee retirement, the majority of which is his own contributions to an IRA. City employees are required to work seven years before they are fully vested in the pension plan, City Finance Director Dawn Miller said. After seven years, employees can keep the full city contribution to the retirement plan.

Kibbon said Hudson will also receive compensation for any accrued vacation time between now and November.

Hudson is the third city department head to announce their departure in recent weeks. Library Director Cecilia Lawrence recently told the city council that she is looking for an assistant to eventually take her position. And, Public Transit Director Marilee Hyde has resigned after 45 years of city employment.

Hudson told the Bulletin he has mixed emotions but the time has come. He has put on a uniform every workday for 35 years since he joined the Marines at age 18.

After five years with the Marines, he started his police career with the Los Angeles PD, where he worked a variety of assignments in many of Los Angeles’ most diverse neighborhoods for nearly 26 years. He honorably retired from there on Sept. 30, 2018 and joined the North Platte police department the next day.

The city announcement said Hudson has focused on character, discipline, transparency and community policing and been active in events in the community, excelling in establishing a positive policing approach. Few people would argue with that statement.

Hudson said his years in L.A. impressed him with the importance of good relations with the community. He served during the Rodney King and O.J. Simpson scandals, as well as the Rampart scandal of the late 1990s, when more than 70 police officers affiliated with the anti-gang unit of the LAPD’s Rampart division were implicated in some form of misconduct, making it one of the most widespread cases of police corruption in history.

Hudson said he learned the importance of communicating openly with the public and being accountable.

“You learn how to talk and most importantly, how to listen,” he said. “We spend a whole lot more time these days taking the public’s interests to heart.”

“Our community has benefited tremendously from his leadership,” Mayor Brandon Kelliher said. “We will miss his calm, practical, and friendly approach to our town.”

Hudson said the North Platte Police Department is in good shape, thanks to top quality officers, although it is out of space in the headquarters / public safety building. He said the department’s top priority is to find a bigger building for the PD as well as North Platte Fire Station No. 1.

“There is not an inch left to expand and grow,” he said. “The walls are 18 inches thick and there is no drop ceiling. We can hardly run new lines to upgrade technology. It was built as a hospital.”

He believes crime fighting in North Platte will continue to be effective, thanks to dedicated officers and the addition of a new machine that analyzes suspected drugs such as meth and confirms the chemical composition, instead of waiting 3-6 months for test results from the state crime lab.

That new analyzer means people who are charged with drug possession could go to jail immediately and not back on the streets, waiting for lab results, with incarceration up in the air.

He was in Kuwait during Desert Storm, when Iraq invaded Kuwait and the U.S. came to Kuwait’s defense. Hudson was captured. He spent 133 days in an Iraqi prisoner-of-war camp in Baghdad.

There, he survived on rice and tuna fish, endured the uncertainty, and witnessed the power and corruption of Iraq’s state-run Iraqi news media. He came out with “tremendous respect for the free press,” which contributed to his emphasis on openness as a police officer.

Hudson holds a bachelor’s degree in Criminal Justice, Police Management and a master’s degree in Organizational Leadership. He also has an FAA Commercial Helicopter Pilot rating, as well as certificates of completion of noted leadership training programs.

He has amassed more than 3,000 hours of certified law enforcement training.

He told the Bulletin that he has no plans to run for the Nebraska state legislature, despite some encouragement to do so.

After he leaves North Platte in November, he plans to move to Florida to be closer to family members and enjoy retirement, complete with fishing and golfing.

(This report was first published in the Bulletin’s June 23 print edition.)