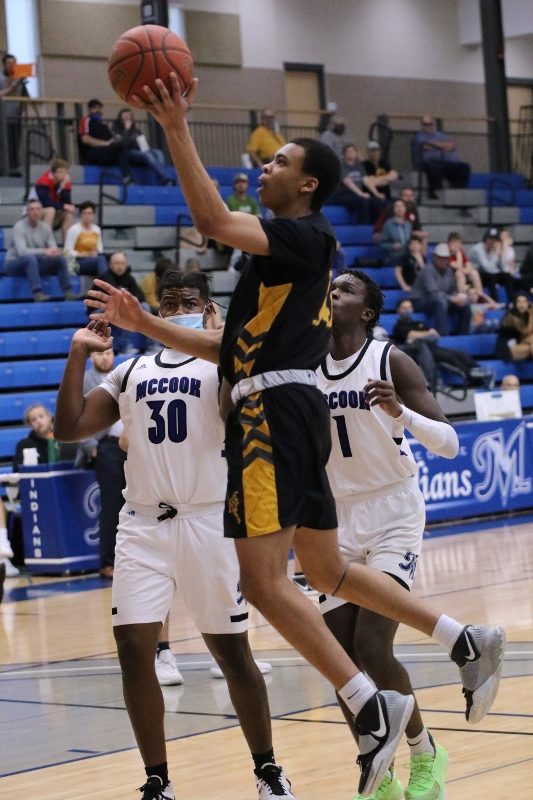 North Platte finishes their 2021 campaign with a 7-13 overall record.

In the opening half, the Indians jumped out to an 8-2 lead in the opening three minutes of play. The Knights trimmed the deficit down to five, as Timur Krupalija was able to cut through the paint and lay one off the glass with 14:44 to play in the first half, 11-6.

McCook answered the short run by the Knights with an 11-2 run over the next three minutes to push their lead to fourteen, with 11:39 remaining in the first half. Jevarrick Butler briefly answered the Indians run with a three pointer from the deep corner but the Indians stretched their lead to fifteen as they captured buckets on back-to-back offensive possessions.

Trailing 26-11, the Knights offense hit their mark launching a 22-4 run over the final nine minutes to take the lead into the halftime break. During that stretch, German Plotnikov stole the ball and was able to get a two-handed slam in transition to cut the deficit to 27-22. Slavomyr Marchenko knotted the game up at 30-30 after getting his hands on a loose ball in the Indians backcourt and getting his layup to fall in transition. Plotnikov gave the Knights the lead with 1:08 to play in the first half, after he received the pass from Nolan Sughroue and connected from downtown, 33-30.

The Knights’ run continued early in the second half, as Sughroue connected on a deep corner three to push the North Platte lead to six, 36-30. McCook answered with an 11-3 run over the next four minutes to recapture the lead with 15:07 to play, 41-37.

The Indians were able to extend their lead to seven, before the Knights trimmed the deficit to two as Plotnikov found Trevon Dennis in the paint for the lay in, 48-46. McCook pushed their lead back out to four on a layup, but the Knights answered as a Plotnikov jumper and a bucket by Dennis gave the Knights back the lead with 7:54 to play, 53-52.

The Indians and the Knights continued to battle on the offensive end trading buckets over the next 2:30, before a 6-0 run by McCook extended the deficit to seven, 64-57. Over the closing minutes, the Indians extended their lead to nine and the Knights were unable to capture the momentum needed to complete the comeback.

Plotnikov led the Knights with 20 points in thirty-four minutes of action. Dennis and Danilo Matovic rounded out the Knights double digit scorers with 10 points and 11 points, respectively. Jason Eubank was the top rebounder for North Platte, finishing with seven rebounds in twenty-nine minutes.