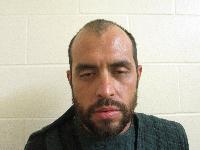 At 2:10 p.m. Tuesday, a deputy on patrol tried to pull over a reckless driver about 10 miles north of North Platte on U.S. Highway 83, but the vehicle refused to stop.

Eventually, the vehicle turned onto rural county roads. The deputy pursued into Logan County. Along the way, the driver threw out at least two bags of property, according to the sheriff’s statement. The vehicle finally stopped west of Stapleton on a county road and the deputy, a woman, took the driver into custody, the sheriff said.

The driver was identified as Logan County resident and career criminal, Joseph Duran, 36.

During the pursuit, it was discovered Duran told a woman in the area to pick up one of the bags that he’d tossed. The woman was stopped by Nebraska State Patrol and the Logan County Sheriff and identified as Duran’s wife, Alissa Duran, 36.

A search of the bag revealed nearly a pound of suspected marijuana. A state trooper also recovered another bag that contained at least four ounces of suspected methamphetamine, the sheriff said.

Duran was taken to the Lincoln County jail.

The Logan County sheriff’s office arrested Alissa Duran and took her to the Custer County jail.

The investigation is continuing, and more charges are possible for both suspects, the Lincoln County sheriff’s office said.

Below: Photos of the substances and related items, from the Lincoln County sheriff’s office. Tap on images to enlarge.