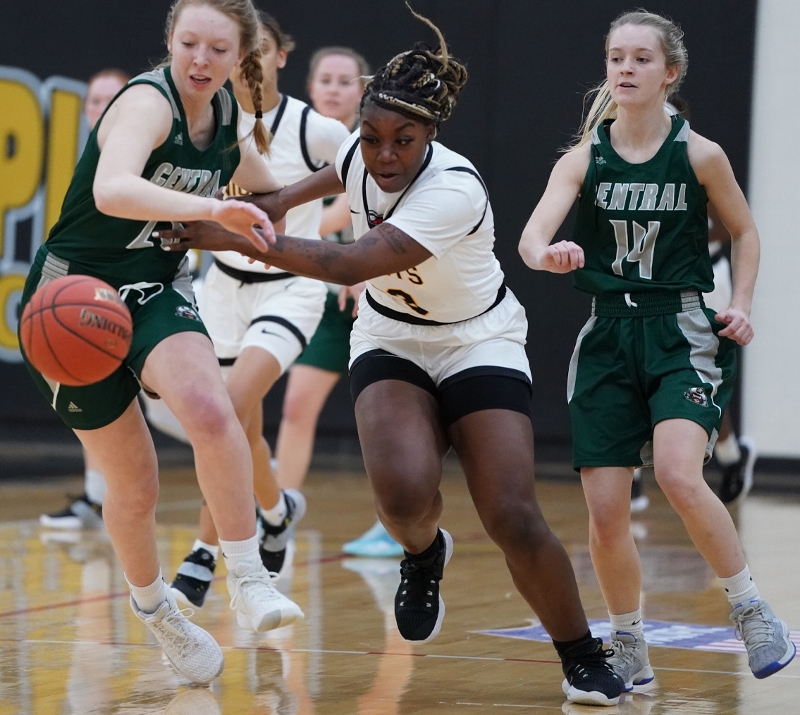 The Knights fought off a resilient Raiders team to remain unbeaten at home, 76-58.

“I’m proud of our resolve and fight tonight,” said head coach Jeff Thurman. “We missed a lot of open shots, but we did not let that effect our effort and energy.”

The Knights opened the scoring as Kayla Pope dished the ball inside to Jada Ballard for the uncontested layup. The Raiders tied the game up at the 7:34 mark of the first quarter, before a 7-0 run gave the Knights a 9-2 advantage inside six minutes to play.

North Platte and Central continued to battle on the offensive end, as the Knights lead never diminished under four points until the clock moved inside the final minute of the quarter. After a Jordyn Moon layup stretched the Knights lead back to seven, the Raiders unleashed a 6-0 run to pull back within 16-15 at the end of the first quarter.

The Raiders continued their run to open the second quarter, as the visitors took their first lead of the game in the opening seconds. Pope responded for the Knights on their next offensive possession by cutting through the lane and getting her off-balance layup to fall. The layup ignited the North Platte offense, as an 8-0 run pushed the Knights lead to 26-17 with 7:14 to play before halftime.

Knights and Raiders traded baskets over the next four minutes, before North Platte extended their lead to eleven at the 4:02 mark of the second quarter on a three by Pope. The Knights lead stretched to thirteen, before Central cut the deficit back to 41-32 by the end of the second quarte.

Out of the halftime break, a 9-0 run through the opening four minutes of the third quarter quickly shifted the momentum in favor of the Raiders. Needing to capitalize on their next offensive possession, Pope drove the lane and laid her contested layup off the glass to put North Platte back in front, 43-41.

The game tightened up over the next three minutes until the Knights were able to stretch their lead to 52-47 as Moon connected on back-to-back free throws. The Raiders narrowed the deficit back to one inside the final two minutes, but North Platte managed to stretch their lead back to a 56-53 advantage by the end of the third quarter.

North Platte reversed the momentum to open the fourth quarter as a 9-0 run extended the lead back to double-digits, 67-53. Central temporarily halted the run, but the Knights closed out the game on a short 9-2 run to seal their eleventh win of the season.

Pope and Diamond Moore-Heath combined for thirty-six points on the night, as they totaled 19 and 17 points, respectively. Avery Johnson contributed eleven points off the bench on four-of-six shooting, while Ballard led the Knights on the glass with fourteen rebounds to accompany her six points.

As a team, the Knights shot 40.3 percent (31-77) from the field, but just 3-of-26 from the perimeter on the night. North Platte won the battle of the boards by out rebounding the Raiders, 54-40, while holding Central to just 31.7 percent shooting from the field.

“It’s always great to start off region play with a win,” said Thurman. “Now we must prepare for a tough Northeastern team next week.”

The Knights (11-5) will hit the road for six straight road games beginning with Northeastern Junior College on Tuesday, Jan. 11. Tip is set for 6:30 pm at the Bank of Colorado Event Center in Sterling, Colo.