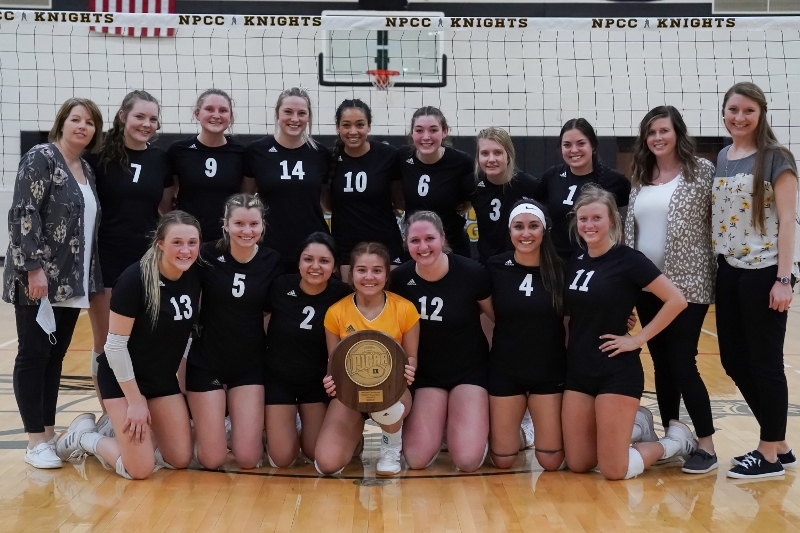 The North Platte Community College volleyball team battled in a five set thriller with Central Community College, to earn the Region IX championship on Saturday afternoon at the McDonald-Belton Gymnasium.

“I am so proud of this team,” NPCC head coach Alexa McCall said. “Our hitters came through big for us today and I thought our execution in the first two sets and in set five gave us an opportunity to win.”

In the opening set, the Knights jumped out to a 7-4 lead on an attacking error by the Raiders. The Knights and Raiders continued to trade points, before Central capitalized on a few errors by North Platte to knot the score at 13-13. Avery Johnson answered for the Knights receiving a perfect set from Erica Hopping and delivering a shot in the middle.

The Raiders answered the Knights powering attack and regained the lead midway through the first set. Peyton Negley highlighted the home crowd by delivering a cross court kill, that sparked a 5-0 run for the Knights. Leading 20-17, the Raiders rallied and cut the deficit to two. Alysen Daniels closed out the first set with three of the final five points, to give the Knights an early 1-0 set lead.

In set two, the Knights again jumped right out of the gate building a 5-1 lead on an attacking error by the Raiders. North Platte would not allow the Raiders to swing the momentum and built a 13-9 lead on a kill by Daniels.

The Knights continued to control the second set as Johnson kept the Knights rolling with a solo block in middle, 20-15. The Knights and Raiders traded points towards the end of the second set, but back-to-back kills by Peyton Negley and Taylor Hansen gave the Knights the two set advantage, 25-21.

In sets three and four, the Raiders turned the tables and jumped out to an early lead and kept the momentum in their favor to force a decisive set five for the Region IX Championship.

The Knights returned to form in the fifth set, fighting back from a 3-1 deficit to knot the game up on a block by Negley, 3-3. North Platte built a 6-4 advantage, before the Raiders cut the deficit down to one, 7-6. North Platte responded with a 4-0 run to swing the momentum in their favor.

The Knights defense continued to make acrobatic plays, which limited the chances for the Raiders comeback. Leading 13-8, Hopping received the pass from Ruby Valle and pushed the ball to the back corner which gave the Knights matchpoint.

On the second match point, Tania Morales sent a challenging ball over the net that could not be received by the Raiders and the Lady Knights won the title.

The Knights were led by Daniels and Negley who each tallied 18 kills on the afternoon. Hopping recorded 57 set assists, as Valle kept the Knights offense running smoothly with 38 digs from her defensive specialist position.

The Knights will advance to the District G championship to take on the winner of Region XIII on Friday, April 2.