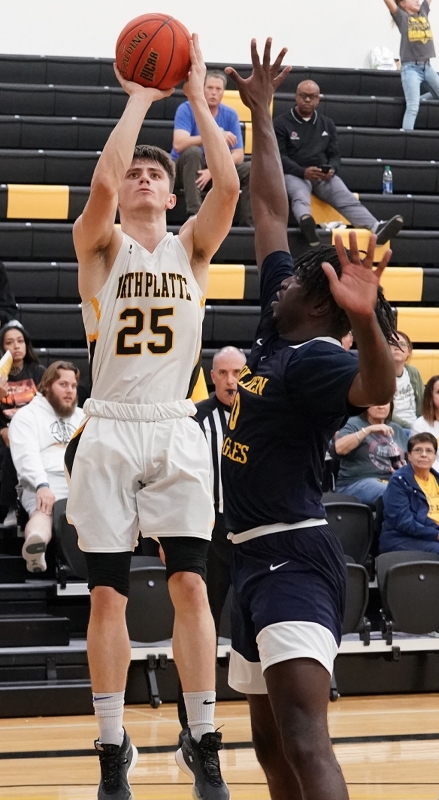 German Plotnikov shoots against Laramie County's Derrick Harden in the second half.

The Knights had a battle on their hands early, as the Lancers jumped out to a 7-4 lead in the opening 2:41 of the first half. North Platte answered as German Plotnikov found a cutting Trevon Dennis for the one-handed jam to bring the Knights back within one.

The Lancers pushed their lead to five with 13:51 remaining in the half, but the Knights continued to stay around cutting the deficit back to one just a minute later, on a floater by Mitar Cakovic. The Knights and Lancers continued to trade baskets for the next four minutes as the deficit never climbed over five points during that span.

Inside the final eight minutes, the Knights captured their first lead of the game at 20-19 on a reverse layup by Dennis. It took nearly two minutes for Eastern Wyoming to respond, as they managed to retake the lead and extend their advantage to five as the clock moved inside six minutes.

Despite being down by five, the Knights continued to chip away at the lead cutting the deficit to one possession multiple times over the next five minutes, before closing out the half on a 4-1 run. During the run, Plotnikov energized the Knights with a steal and a layup in transition, before Butler’s mid-range jumper gave the Knights a one-point advantage at the break, 37-36.

North Platte stretched their lead to five in the opening two minutes of the second half on another mid-range jumper by Butler and a layup by Timur Krupalija, 41-36. Eastern Wyoming trimmed the deficit down to three, before the Knights launched a 14-0 run over the next four minutes to extend their lead to seventeen, 60-43.

North Platte continued to apply the pressure defensively and stretched their lead to nineteen as the clock moved inside ten minutes to play on a contested layup by Butler, 70-51. Eastern Wyoming attempted to swing the momentum cutting the Knights lead down to fourteen inside the final four minutes.

The North Platte defense continued to force the Lancers into some tough looks at the basket over the remaining minutes and closed out Eastern Wyoming for their second win of the season.

Plotnikov paced the Knights in scoring with a season high 31 points on 10-of-15 shooting from the field. Caleb Horne finished the afternoon as the Knights top rebounder collecting seven boards in thirty-one minutes of action.

North Platte (2-2) will look for redemption on Wednesday at Colby Community College. The Knights and Trojans met during the opening week of the season, with Colby defeating the Knights, 84-72.

NPCC suffered heartbreak as Laramie County Community College came from behind to defeat the Knights in overtime, 88-84.

The Golden Eagles jumped out to a five-point advantage to start the overtime period before Nico Felici found a cutting Krupalija inside for an open layup. North Platte cut the deficit down to one as Butler earned a trip to the free throw line and connected on both of his free throw attempts.

Laramie County responded by adding to their lead on their next offensive possession, but the Knights continued to keep it close as Plotnikov found Felici open on a back cut to draw them back within one with 1:55 to play. Laramie County didn’t relinquish their lead down the final seconds and closed the game at the free throw line, stealing the win away from the Knights.

The Golden Eagles jumped out to a four-point lead in the opening forty-five seconds of the first half. The Knights received their first bucket of the night as Krupalija got his contested layup to fall over the outstretched hand of defender. Laramie County answered the bucket with their own to extend the lead back out to four with 18:38 to play in the first half, 2-6.

North Platte answered with a 9-0 run over the next three minutes to take their first lead of the game on a Butler straight away three, 11-6. The Knights continued the offensive attack stretching their lead to nine on a Plotnikov three. The Golden Eagles answered and trimmed the Knights lead down to three as the clock moved inside 11:20 to play in the opening half.

A reverse layup by Krupalija and a free throw line jumper by Plotnikov pushed the North Platte lead out to eight. The Knights and Golden Eagles continued to trade baskets back and forth down the stretch but managed to end the half with a seven-point advantage, 40-33.

Laramie County began to cut into the deficit and swing some of the momentum in their favor as the clock moved inside the final ten minutes of regulation. North Platte answered by pushing their lead back to five as Matovic was able to get his contested layup in the paint to fall, 58-53. The Golden Eagles continued to hang around and eventually tied the game up with 5:08 to play.

North Platte regained the lead on their next possession and quickly extended their lead to 72-66. Inside a minute to play, the Knights held a four-point advantage, but Laramie County erased the deficit and forced an overtime period.

North Platte had four scorers who finished the night in double digits including Plotnikov (23), Krupalija (16), Felici (15), and Butler (15). Krupalija was the Knights top rebounder finishing with nine rebounds in twenty-six minutes.