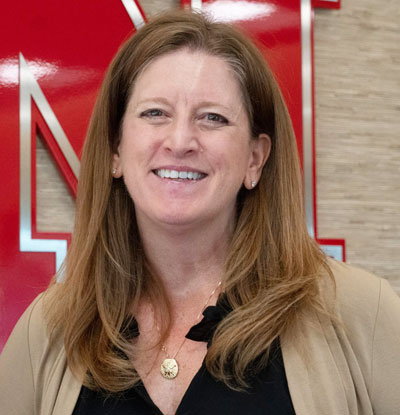 While on a 4-H tour with an intern from Nebraska Rep. Virginia Smith’s office, young Deb Fiddelke of Kearney asked how the intern got there, eventually paving her own path to positions on Capitol Hill and the White House.

Maneuvering her way through multiple jobs in different campaigns and offices for representatives and senators, in 2002 Fiddelke moved to the White House, starting in an office in the East Wing of the White House and later the West Wing with President George W. Bush’s administration.

Fiddelke started in the White House Council on Environmental Quality and was later promoted to the deputy assistant to the president for legislative affairs.

“There were many, many days I would either walk past a rose garden or park on West Exec between the West Wing and the old Executive Office Building and you’re like, ‘I’m just this girl from Kearney,’” Fiddelke said. “I would just almost pinch myself, you know, ‘Is this really real?’”

Fiddelke, now the chief communication and marketing officer for the University of Nebraska-Lincoln, graduated from UNL in 1990 and 1991 with degrees in journalism and political science, respectively. She said she was an advertising major in a recession who got rejection letters from “every ad agency in the Midwest” before getting a job with Rep. Doug Bereuter (R-Neb.).

She later worked on Mike DeWine’s Ohio Senate race in 1994, with Ohio Rep. Deborah Pryce in Washington and on Chuck Hagel’s 1996 Senate race. Fiddelke was Hagel’s campaign press secretary and became his communications director after he was elected.

In the last couple of years before she moved to the White House, she was also one of his policy advisers.

Fiddelke said during her time In the White House, one of the components that stood out was understanding the working relationship between two branches of government. This plays into the “grand experiment” of democracy the founding fathers established that, while imperfect, allows for compromise and self-governance, she said.

“It’s precious, and I think we’ve gotten to the point where we take it for granted, and it has to be zealously guarded,” Fiddelke said.

Ahead of the 20th anniversary of 9/11, Fiddelke detailed the importance of the day after, Sept. 12, and how people cast aside differences and came together; an inspiring lesson of humanity.

“It rests upon us as citizens to do a little bit more work and expose ourselves to other things,” Fiddelke said.

It’s possible to try and get to “win-win” solutions, Fiddelke stressed, and though they may be difficult moments, they’re necessary.

“There are always ways to move forward if you think hard enough, work hard enough or creative enough to craft a compromise where everybody gets most of what they want and then advances something that is good for the country and good for the American people,” Fiddelke said.

Candi Wolff, who served as the assistant to the president for legislative affairs in Bush’s administration and was Fiddelke’s boss, said Fiddelke’s extreme strength of character, integrity and honesty always stood out.

“Truth is your bonds,” Wolff said. “Your integrity is really what you have to work within our business, and Deb was known for that integrity.”

People were expected to deliver and represent ideas, and Fiddelke’s strong sense of character and ethics amplified what it meant to be democratic.

“Things were relatively smooth internally in an environment in which the external factors are always rocky, always turbulent,” Wolff said. “You’ve got to have somebody who’s going to have good thoughts, not panic, not freak out, et cetera and get too anxious about it, and that was Deb.”

Hagel said Fiddelke is a phenomenal, tremendous person — ”as good a person as I’ve ever come across” — and that’s where the conversation begins.

While Fiddelke could not remember her first time meeting Bush, fortunate to have many interactions,  she recalled two occasions working with him, both when her boss was out of town or on Capitol Hill.

Her first time in the Oval Office by herself was after she had gotten into her deputy assistant position and a particular member of Congress wanted a bill signing. Both President Bush and First Lady Laura Bush would be there.

“I had this new suit jacket that I wanted to wear, and I couldn’t find a skirt to match, so the 4-Her in me went and bought fabric on a Sunday and made a skirt to wear the next day,” Fiddelke said. “I was so nervous my knees were literally knocking together, and the president had the great grace to realize how nervous I was; he was such a good sport.”

The other time Fiddelke described was when she had to go to a meeting and lay out whether the administration should maintain a veto stance on a particular bill. The man on the other side of the argument was Vice President Dick Cheney.

“And every job she’s had, she’s enhanced all of that by the job that she’s got,” Hagel added.

Fiddelke said she swore an oath to protect and defend the Constitution, which may require telling a boss they’re not on the right path.

he Nebraska News Service is produced by the University of Nebraska-Lincoln College of Journalism and Mass Communications.