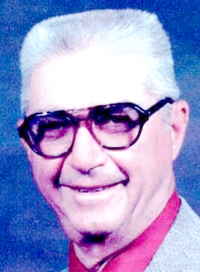 He was born March 15, 1926 in Sutherland to Wilbur G. (Bill) and Faye M. Dority Mitchem. His early years were spent on farms and in rural schools in the Paxton, Roscoe, and Ogallala areas. The family moved to Perkins County in 1938 where Gene finished his education, graduating from Perkins County High School in 1942.

Gene enlisted in the United States Army in 1944, was sent to the South Pacific Theater, assigned to the 7th Infantry Division, participated in the Okinawa Campaign, was wounded and ultimately discharged in 1946. He returned to Grant and took employment with P.S. Guildner and Lloyd Kerr who were in the Plumbing-Heating and L.P. Gas business.

In 1947, Gene and Mr. Kerr formed their own partnership, L.P. Service Co., as a Heating and Sheet Metal business. In 1964 they purchased South Jeffers Plumbing and Heating in North Platte, and Mr. Kerr moved immediately, with Gene and his family following in 1965. The partnership was dissolved in 1973 and Gene began his tenure with the Union Pacific Railroad, retiring in 1988 after 15 years.

During his time in Grant, Gene was very active with the Volunteer Fire Department, serving 10 years as Fire Chief. He also believed very strongly in the programs of the American Legion, especially those pertaining to youth.

After retiring he assisted with the Veterans Honor Guard, in North Platte and was a volunteer driver for the D.A.V. Veterans Van, transporting veterans to and from Grand Island Medical Center.

Gene was baptized as a baby and later confirmed in the Methodist Church, accepting Jesus Christ as his Lord and Savior for the remainder of his life.

In 1947 he was united in marriage with Merilyn Kurkowski in Grant. They were blessed with one daughter, Gaylene.

Throughout his life, Gene enjoyed music, especially the Big Band sounds of the 1940’s era. He also liked dancing, golfing, fishing, sports of all kinds, challenging problems such as crossword puzzles and jigsaw puzzles, his family, his grandkids, people in general, and most of all a good hearty laugh. He believed that a good laugh was the best of medicines.

Gene was a faithful and devoted husband, a loving, caring father and grandfather, and a friend to those who knew him. He will be sadly missed by all who knew and loved him.

He was preceded in death by his loving and devoted wife of 71 years, Merilyn; his parents, Bill and Faye Mitchem; and brother-in-law, Kenneth Brown.

In lieu of flowers, the family requests that memorials be made to the American Legion scholarship fund. Online condolences may be expressed at carpentermemorial.com.