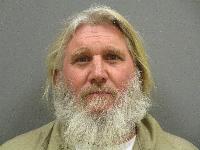 Audie Hazen, formerly of Wellfleet, was sentenced Monday to 5-7 years in prison for meth distribution, in conjunction with the 3-5 years imprisonment he is already serving.

Hazen, 49, is an inmate with the Omaha Correctional Center where he was sent in March.

On Monday, he pled guilty to the distribution charge before Lincoln County District Judge Richard Birch.

According to court records, Hazen was found and arrested on a warrant on Jan. 9 at G and Dewey in North Platte. Police found him in possession of a bank bag containing what appeared to be a rock of meth along with S4,651.94 in cash.

Another meth rock was found in his clothing, prosecutors said.

The Nebraska State Patrol Crime Lab confirmed both items to be meth with the total weight of 15.1 grams, according to court records.

Hazen’s sentence will be served at the same time as the sentences he is currently serving, Birch said, following the recommendation of Lincoln County Attorney Rebecca Harling. Hazen is currently doing time for possession of a firearm by a felon and accessory to destruction.

In other court action, Chase Lenz-Schurr was sentenced to a year in prison for attempted possession of a firearm by a prohibited person. Another charge, possession of a controlled substance, was lessened in a plea agreement.

Lenz-Schurr was arrested on Jan. 9. Defense attorney Robert Lindemeier said his client was one of several people who lived together and Lenz-Schurr stepped up to take responsibility for the firearm. Lindemeier asked for a light sentence.

Birch sentenced him to a year in state prison, with credit for 20 days that he has already served.

Latonya Tyan was sentenced to 364 days in Lincoln County jail for possession of a controlled substance in a plea agreement. A previous charge of distribution of an exceptionally hazardous substance was reduced. Also, her probation on a previous drug charge was officially revoked. Tyan has been in jail for 196 days, so she will be released soon due to good time provisions that reduces a sentence by half if an inmate does not cause any trouble.

Tyan pled no contest to the charges and waived her right to a pre-sentence investigation.

Chanel Sterling was sentence to two years of probation for child abuse and cruelty to an animal.

Prosecutor Angela Franz said a North Platte police officer joined a social worker on July 6 to check on a child’s welfare, and found the motel room where Sterling was living was filthy and hazardous, with the child exposed to methamphetamine and a dog without food or water.

Sterling pled guilty to both charges. Two other charges were dropped in a plea bargain.

Under the terms of probation, Sterling will submit to random drug tests and undergo a psychological evaluation.

Courtney Hansen was sentenced to 30 months in prison for domestic assault.

Hansen, 42, was charged in January 2020 with domestic assault, false imprisonment and criminal mischief.

Hanson threatened to burn down a woman’s home, take her breath away from her, and he shoved, slapped and punched her, leaving bruises on her side, leg and arm, according to the police report. He also broke her windshield and locked her inside the house, and took her keys and phone.

Hanson received credit for 438 days in jail since his arrest.

• Issued a warrant for the arrest of Kent Smith, who filed to appear for sentencing on drug charges.

• Agreed to allow Miranda Lewis to go to in-patient treatment at the Women’s Empowering Lifeline center in Norfolk. Lewis, 29, faces drug charges and has a lengthy criminal history, with 24 district court appearances in 11 years.