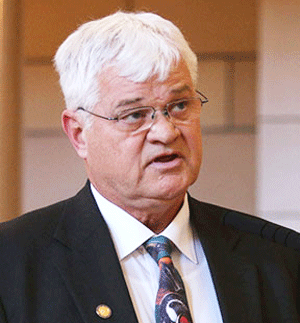 Mike Groene on the floor.

Groene at the Legislature: Columbus Day reminds us of what is possible

Monday, Oct. 11 was Columbus Day, a federal holiday that many, including myself, observe in honor of the achievements of Christopher Columbus.

His story is the genesis of the American dream. He was born into a modest family of weavers who lived above their shop in the Italian city-state of Genoa.

Columbus’s accomplishments belong among a select few human events that changed the course of humanity. His early life defines a self-motivated man. He went to sea at age 14, later studying navigation in Greece and mapmaking in Portugal; while there, he apprenticed on ships traveling to Africa, Ireland, England and Iceland.

After the Muslim conquest of Constantinople in 1453, trade-routes to the Orient were closed to European merchants. Columbus singularly believed that the Orient could be reached by a sea route to the west. The weaver’s son brought his plan to the governments of Portugal, England, France and Spain. Only Spain’s King Ferdinand and Queen Elizabeth accepted his offer. It took another six years to convince them to fund his expedition. In 1492, he sailed west into the unknown in search of the Orient. On Oct. 12, he landed on the island of San Salvador, located between the two continents that make up the western hemisphere.

The settlements that he founded were the origin of America’s Manifest Destiny, the makings of a land of opportunity that became the hope of immigrants from across the world who strained to be free. Today it remains a shining beacon for those seeking liberty.

In the timeline of human history, mankind’s quest for individual justice and liberty has always been marred by injustice and inequity.

Today in our affluent society, there exists a “politically correct” movement called WOKE. This self-righteous philosophy of judgmental hindsight originated on liberal college campuses and is propagated by tenured professors who live a privileged life amongst the impressionable minds of America’s youth. These individuals have sought to discredit the accomplishments of historic figures that they disagree with, by judging their then-commonly practiced official or personal actions through the eyes of today’s societal mores.

Yet, they give a pass to the more recent atrocities committed by their socialist heroes, such as Lenin, Stalin, Castro or Chairman Mao.

Columbus has been a main target for their antagonism.

During the 2020 legislative session, Sen. Patty Pansing Brooks brought LB 848, an attempt to eliminate Columbus Day and rename it Indigenous Peoples’ Day. The bill should have died in committee; instead it was allowed to go forward by amending Sen. Brewer’s bill LB 937 into it. I originally supported LB 937’s effort to highlight the contributions of Native American culture to our state’s heritage by displaying the Tribal Flags of four of our largest tribes in the capitol’s Warner Chamber.

A further compromise was reached when an agreement was made to rename the Day “Indigenous Peoples’ Day and Columbus Day.” Fourteen senators, including myself, didn’t support the final bill.

My plea during debate on the bill was to leave Columbus Day alone.

Also, I worked with Sen. Julie Slama on her LB 399 in 2019), a successful update of history and civics requirements taught in Nebraska’s schools. Native American Heritage Day was added as a holiday that shall be observed. In hindsight, I regret that Columbus Day was not also made a required observance, despite the protest of cancel-culture nihilists.

Obviously, the original intent of LB 848 was never to honor the American Indian. It instead was a blatant act of cancel-culture, obscuring one of the greatest milestones in the annals of history, sullying the memory of an exceptional man and rewriting the history of America’s beginnings.

It attempts to discount the amazing story of the men on three small ships — the Nina, Pinta and Santa-Maria — and of the man who opened the gates to freedom.