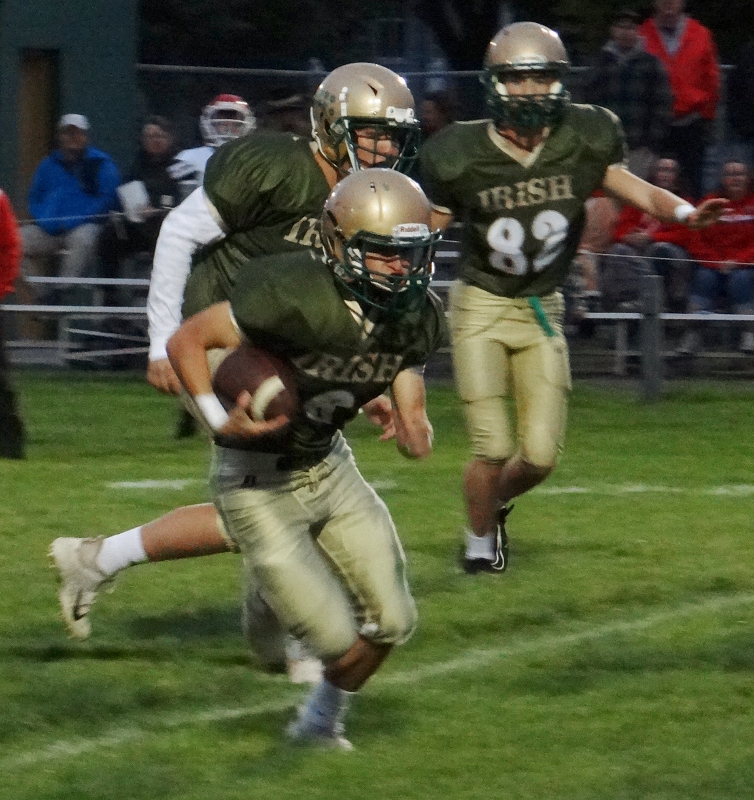 Isaac Irish of St. Pat's runs for a touchdown in the second quarter.

North Platte St. Pat’s had a chance to score on every play they ran from scrimmage on Friday and there was nothing Kimball could do to stop them in their 70-0 win at Knights of Columbus Field.

The Irish (4-0) scored the first touchdown on the second play of the game when Will Moats threw a halfback pass to a wide open Brecken Erickson for a 31-yard score.

A minute later, Jackson Roberts scored for St. Pat’s when he ran in a fumble recovery for a touchdown. On the point after touchdown, Irish quarterback Sam Troshynski, who is also the holder, got a bad snap but he threw to Erickson for the two-point conversion to make it 15-0.

Kimball (0-3) tried to punt after being stopped on their next series. But a bad snap caused Connor Deboodt to be tackled at his own eight yard line.

On the next play, Roberts, the running back, received the snap. He bobbled it but he fielded it and walked in to the end zone for another touchdown.

Moats scored the next touchdown from 35 yards out.

On the next Irish series, touchdown runs by Roberts were called back for penalties on two consecutive plays. But Roberts scored again on the third time from 32 yards out with no flags to make it 36-0 in the final minute of the first quarter.

In the second quarter, Roberts scored again and then St. Pat’s put in their reserves. Isaac Irish got a touchdown from 19 yards out to make it 49-0.

The Irish could’ve scored another touchdown right before the half but they chose to run the clock out with the ball at the three yard line.