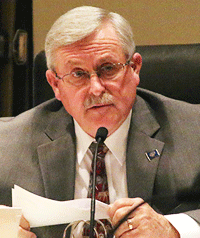 A new political action group has been formed in our state known as Nebraska First. As you may have guessed, the name closely resembles former president Donald Trump’s political slogan, Make America Great Again (MAGA), except that this one is specific to the state of Nebraska.

Nebraska First has asked all state senators as well as candidates for the state legislature to sign a pledge for greater transparency in the legislature.

Before I disclose my reasons for signing the pledge, let me tell you about another political action group that I heard from on the very same issue, Nonpartisan Nebraska. They asked me not to sign the pledge and to continue supporting the practice of using secret ballots for committee chairs.

According to Nonpartisan Nebraska, Article III, Section 11 of the state Constitution does not forbid secret ballot voting, especially where it says, “The Legislature shall keep a journal of its proceedings and publish them, except parts which may require secrecy, and the yeas and nays of the members on any question shall at the desire of any one of them be entered on the journal.”

I agree with them that this particular statement does not forbid the use of secret ballots, but that is not the end of the story.

Nonpartisan Nebraska conveniently left out of their letter the most important sentence in Article III, Section 11 of the state Constitution.  That sentence says, “All votes shall be viva voce.” Viva voce is a Latin expression which means “by voice”.

In other words, all votes must be spoken or at least be made public in some way. The only reason for speaking a vote is for the vote to be made public, and that is why I signed the pledge.

By eliminating secret ballot voting, I believe the Unicameral Legislature will come into better alignment with the state Constitution.

A third reason why I am signing this pledge is to help eliminate back room dealing. Whenever voting is done in secret, votes get traded in back rooms and in the dark hallways of the capital building. Some state senators are willing to trade their vote on a committee chair just to get a bill advanced out of committee, and that’s not right. The time has come for the Legislature to end the corrupt practice of back room vote trading.

So, the pledge for transparency in the Legislature that I signed on Sept. 6, 2022 reads as follows: “I, Steve Erdman, pledge to the voters of District 47 that as a member of the Nebraska Legislature, I will make all my votes for leadership positions public, and I will vote to make all leadership votes a matter of public record by rule.”