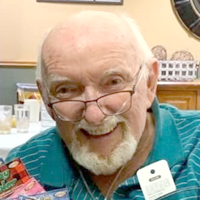 Donald LeRoy Nunnenkamp, 84, of North Platte peacefully passed away on March 24, 2021 surrounded by loved ones after a difficult battle with Parkinson’s Disease.

He was born on Feb. 24, 1937 to LeRoy Charles and Pauline Ruby (Conley) Nunnenkamp in the city of Sacramento, Ca.

One of his many projects was digging out a basement under his childhood home with his dad by hand. Don loved to garden and grew the best tomatoes, much to his children’s dismay he taught them how to weed and harvest the garden. The family enjoyed many special times at Cody Park. Don loved nature and enjoyed traveling to see his children and grandchildren.

He enjoyed the game of pool and could be found at the Eagles Club in the afternoons. On burger nights he took the opportunity to teach his sons Joel and Jason how to play pool. He was an avid Husker fan, watching the games at the Eagles or Brother’s. He was called Nooner by his friends and Smoking Joe by fellow coworkers.

On Friday afternoons he would meet up with a dear friend Don Tuma for beers and keno. Joel and Robyn always made it possible to take dad to Fonner Park to enjoy the ponies. Don was surprised with an 80th birthday celebration at Fonner Park which he enjoyed tremendously.

Graveside services will be at 1 p.m. on Saturday, April 10 at Westlawn Memorial Park Cemetery in Grand Island with Pastor Daniel Bremer officiating. The family is requesting Husker or casual wear.

Cards may be sent to the Family at Donna Meyer 623 West 7th street, North Platte, NE. Carpenter Memorial Chapel is entrusted with arrangements.

In Lieu of flowers memorials are suggested to the Michael J. Fox foundation for Parkinson research P.O. Box 5014 Hagerstown, MD 21741-5014 or online at michealjfox.org. Online condolences and sharing of memories may be directed to carpentermemorial.com.