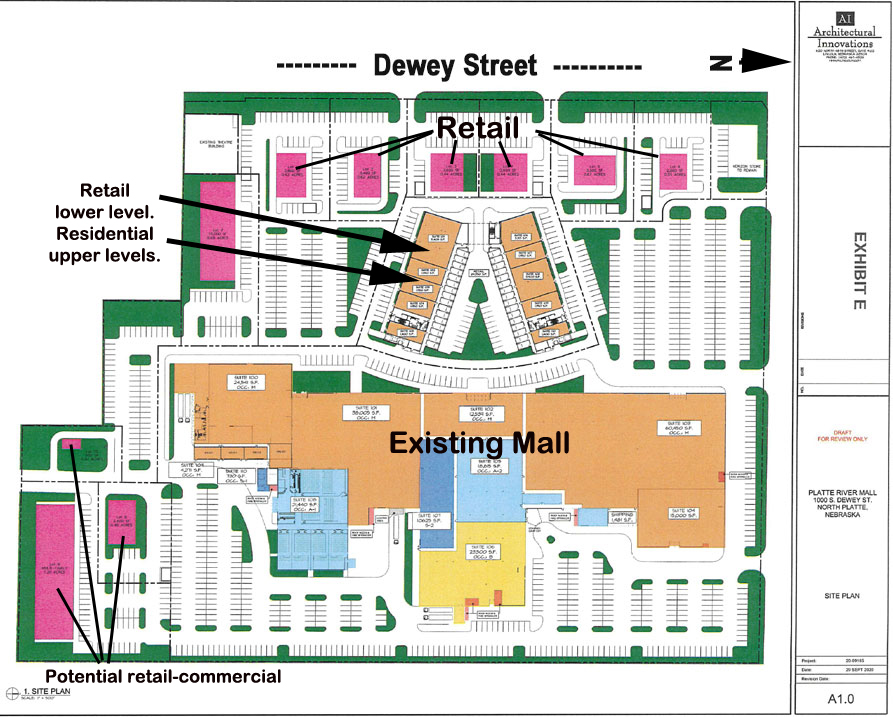 The North Platte city council will consider allowing both apartments and businesses to be built in the Platte River Mall area when the council meets Tuesday evening.

The council would need to rezone the property to allow for mixed uses – residences as well as businesses. Currently, only businesses are allowed.

The council meeting begins at 5:30 p.m. at City Hall, 211 W. Third. Council meetings are public, and it will also be broadcast live on computers and smart phones. To connect, go to the city website and click on “Government” and then “City council” and then “Agendas and Minutes” follow the prompts.

The mall developers want to build more retail shops near the street and make extensive renovations to the main building at the mall.

And, the primary addition will be a four-story building with retail shops on the ground floor and 96 apartments on the upper floors. That would be constructed in the center of the existing mall parking lot.

Construction should begin in June if all goes well, Manager Mike Works told the Bulletin Monday. Works also said a new entrance will be built this spring to the main mall building, south of the entrance to the old Herberger’s store.

Currently, existing stores on the south side of the main mall are moving to the north side to accommodate renovation. They will remain there about a year, Works said, and then have the option to relocate elsewhere on the property.

Near Dewey St., new building space will be created for a half-dozen retail shops.

The new mall owners will talk at city meetings on April 27 about tax increment financing and a special enhanced employment area sales tax.

The EEA (enhanced employment area) designation would allow businesses in the mall area to charge another 1.9% in sales tax and use it to help offset development costs.

“If people are in favor of redeveloping the mall, I encourage them to come on April 27 and let city council members know,” Works said. “I think this is an exciting project. I like North Platte. we want to improve something that improves the quality of life in the city.”

Here’s how the project would proceed, according to plans and documents filed with the city:

The first phase of construction will be the mixed-use building in the middle of the complex. Demolition of the parking areas in that area, and dirt work to prepare for the footings and foundations, is anticipated to begin in May.

Also in Phase 1, the renovation of the main building will begin. The inside hallway will be removed. Store spaces will be enlarged, with entrances and exits at the front of the building, or where appropriate, at the back.

The tire store near the front of the property, and the drive-through bank building on the north side of the parking lot will be demolished by Dec. 31, according to the plans.

The Verizon Store on the northwest property corner will remain. Arby’s will continue operation for the immediate future but eventually will be demolished and the business will relocate.

The movie theatre building on the southwest property corner will also remain, with an eye toward bringing in a new company.

In all, the property will be divided into 13 separate lots, Works said.

Mixed-use buildings will allow for residential development and a stand-alone multi-family residential structure will be erected near the southeast corner for possible future use.

Parking lots will be reconstructed and reconfigured to the west, south and southeast of the mall, Works said. Parking areas to the north and east will remain with some minor patching, repairs and striping.

Also, the storm sewer will be re-routed, the plans say.

It will be busy city council meeting, with hearings on several zoning question, the foremost of which is a blighted and substandard designation for 374 acres on the east side of the city, which could become the site of an independent meat packing plant, if the project develops in coming weeks and months. Organizers have said they want to break ground in September.