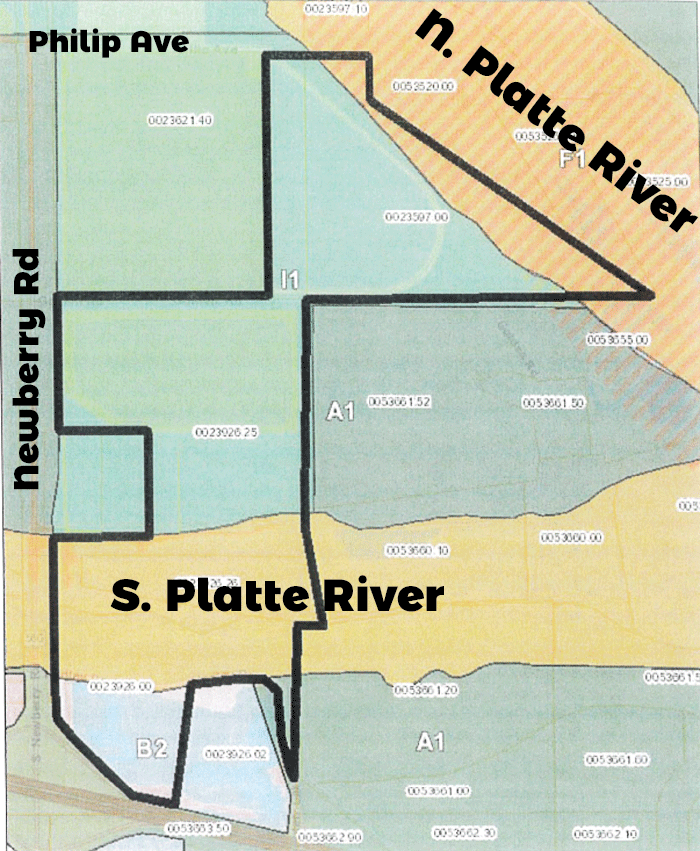 The city council has looked at declaring nearly 375 acres of land just east of North Platte as blighted and substandard, a step that is typically a prelude to development.

The land is along and east of Newberry Road (State Link 56G) and north of the I-80 corridor.

Councilman Ty Lucas expressed excitement about the potential of a business there. It’s a challenging area to develop, he said.

Lucas also cautioned the planning commission to be mindful that there is a limit on the overall percentage of city property that can be declared blighted and substandard.

The property includes two abandoned sewage lagoons. The roads in the area are in fair and poor conditions. Portions of the lots are located within floodplains of the North and South Platte Rivers, as well as the South Platte River floodway itself, according to a 131-page study of the area by Hanna Keelan and Associates.

The study contains no information about the type of redevelopment that is likely in the area.

In other business Tuesday, the council approved the rezoning of a strip of land near Walker Road and Buffalo Bill Ave. for a new gas station and convenience store.

The vote was unanimous, but the council declined to waive the required three readings before the change becomes official. Some council members indicated they might waive the third reading.

The council will take it up again in two weeks.

Also, the council approved a $40,000 agreement for a new record-keeping and scheduling program or the public transit system, as well as cameras on the buses. The city’s share will be about $1,000 a year, with the rest of the costs paid by state and federal money.

Tryon asked for a study of the costs of converting the bus service entirely to a city operation, which Mayor Brandon Kelliher asked city manager Matt Kibbon to provide. Tryon also moved to table the decision on the new software, but the motion died for lack of a second.

The council agreed to the new software. Tryon voted no.

• Approved the mayor’s appointments of department heads, with no changes.

• Authorized the city manager, mayor and building inspector to approve minor changes in the city’s requirements for landscaping new developments without the approval of the board of zoning adjustment.

• Approved a new water main on Jeffers St. on second reading, and waived the third reading requirement, so the bidding process can begin. Costruction is planned this summer. The main line will be enlarged from 8 inches to 12 inches in diameter.

• Approved a series of changes in parking regulations around town at the recommendation of the city engineering department.

Top photo: The proposed blighted area is east of Newberry, inside the black lines. Image from the city of North Platte.