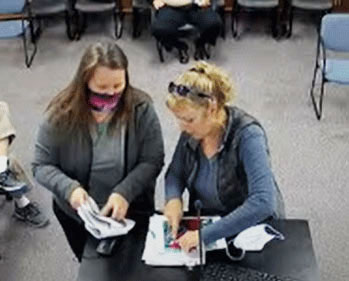 Grappling with the pros and cons of development within the city limits, the city council discussed three developments Tuesday night for nearly three hours.

In the end, they approved two steps toward development, after listening to protests from people who will be affected, and engaging in some extensive debate.

First, the council approved a zoning change at the corner of Front St. and Oak that will allow a small electric installation and repair company to build a storage shop there. Streeter Electric has already bought the property and wants to move their storage and supplies to North Platte from Sutherland.

Neighbors fear noise and the disruption of residential life. There is a new home in the neighborhood and others have been remodeled, they said.

After much discussion, the council approved the rezoning, 7-1, moving the land into a light industrial zone. Andrew Lee cast the no vote. Lee said he wanted trees and shrubs to shield the shop area from nearby residents, but he did not make a motion to that effect.

Streeter does not expect to create a lot of noise or traffic. He and his wife run the business with one employee. He said they only have a couple of service pickups and a trailer.

Neighbors are concerned that even if Streeter’s operation is compatible with residences, a subsequent owner might create more noise and clutter, once the land is zoned for light industrial use.

The lot is empty. Councilman Lawrence Ostendorf recalled the time the neighborhood rose in protest against building a headquarters for Habitat for Humanity on the same corner. Habitat later built elsewhere.

The council must approve the zoning change on two more readings before it takes effect, so it will come before the next city council and mayor, who will take office in two weeks.

The council listened to protests about a update of the city’s comprehensive plan that lays out potential sites for annexation of businesses and buildings “on the rim” of the city.

Annexation brings areas on the outskirts of the city into the city limits. Businesses in those areas must then charge city sales tax and pay a little higher property taxes too. Services are generally more plentiful for those businesses.

The owners of several businesses, including Weathercraft Roofing and the Garden Glove/Coffee Bin, protested the possibility of annexing land in the northeast corner of the city, between the railroad tracks and East 12th St.

Scott Erickson of Weathercraft said annexation would be a blow to his homegrown business, which operates in five states from its North Platte headquarters.

Likewise, Penny Billingsley, the owner of Garden Glove, said she and husband Randy have a seasonal business that operates on a thin margin. She said they had to install a water and sewer system for their drive-thru coffee and sandwich shop because there is no city utility infrastructure there. She was once told that no infrastructure was installed when the U.S. 30 bypass wrapped around that corner of the city because the city had no plans to annex it, so she and Randy had to make their own installations. She also said there is no place for the city to grow in that area, because it is surrounded by streets and railroad tracks.

Other businesses and residents of that area had similar complaints.

Planning consultant Keith Marvin said the plan before the council was just a plan, and an in-depth study would have to be undertaken before any annexation of an area actually took place.

In the end, the council approved the comprehensive plan changes, but first they unanimously agreed to reclassify the area along E. 12th as a No. 3 priority for annexation, instead of a No. 1 priority.

Then when the vote came on the overall plan, councilman Jim Carman voted against it. During debate, he suggested the council should “nip it (the E. 12th area) in the bud.”

During the debate and discussion, Councilman Ty Lucas and Marvin talked about some of the overall advantages of annexation to the city. With annexation, the city ends up with more land mass, collects more sales and property taxes, and has more latitude to declare areas blighted and substandard, thereby qualifying for tax increment financing. Blighted areas can comprise no more than 35% of the city.

Marvin said businesses on the edge of the city limits use city streets without helping to pay for them through city sales and property taxes, which is not fair to city taxpayers.

“There’s those benefits (to the city) there,” Marvin said. “Also, I keep hearing complaints that North Platte is not growing in population, but a lot of population sits outside the city limits.”

Lucas said annexation also helps equalize taxes, so everyone pays a fair share. He said North Platte is a little behind the 8 ball on annexation.

Lucas also said the 35% blighted limit is a real concern, especially if the city wants to use the micro-TIF bill that is geared to help re-develop small properties, such as individual homes and businesses.

“I think city needs to be prepared for a lot of annexation discussions in the next 5-10 years,” Lucas said.

Also, the council heard a required annual report from Justin Warner, who has a permit to develop a commercial greenhouse in the 2000 block of W. Eugene. Warner has put up some fence, but that’s all so far. He told the council he basically got busy with other projects, but he plans to have another section of fence installed by the end of the year.

Adjacent property owner Michael Cook said Warner has yet to submit a plan to contain runoff if he puts a parking lot on the property, which is in his initial plans. Cook said the property is generally unkept with tall weeds, and Warner burned some materials the day before without a burn permit.

Cook asked the council to revoke the conditional use permit.

He said Eugene Ave. is too narrow and is not suited for commercial truck traffic either.

The council thanked everyone for their comments but took no action on the matter. None was required.

In other business, the council:

• Approved a special liquor permit for Lazy RW Enterprises for a tasting event at Brittany’s in the Platte River Mall from 2-7 p.m. on Dec. 5.

• Forwarded the application of Pat J. Doering to be the liquor license manager at Love’s Travel Stop to the state liquor commission with no recommendation.