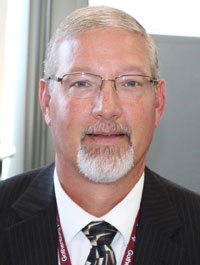 Todd Rhodes officially received a two-year contract as the incoming superintendent of North Platte Public Schools Monday, with a $230,000 salary.

School board President Skip Altig enthusiastically said the board believes they have the correct person for the job, and thanked everyone who helped with the search process, from the Nebraska Association of School Boards to Sodexho food service that prepared meals for the interviewers.

Altig predicted that Rhodes will lead the school district in a good direction, continuing the work of Supt. Ron Hanson, who is retiring at the end of the school year.

Altig thanked the civic leaders, teachers and administrators who interviewed the four final superintendent candidates in meetings for four days. Altig and board member Matt Peterson negotiated the contract with Rhodes, and Altig said all parties were happy with it.

In addition to his new superintendent’s salary at North Platte, Rhodes will receive a 9.8% match in retirement benefits, a $10,000 life insurance policy, 20 vacation days and 10 sick days a year, travel expenses and fees for conferences, dues for membership in professional organizations, and a $100-a-month subsidy for a smart phone. He will buy his own health and disability insurance.

With taxes, the annual cost of the contract to taxpayers is just over $268,000 a year.

Cory Spotanski was announced on Monday as the new principal of North Platte High School..

The hiring was one of several personnel changes approved by the school board.

Spotanski, 43, is the high school principal and athletic director in Elm Creek. Prior to that, he worked for nine years in the Cozad schools.

Spotanski will take over for Scott Siegal on July 1. Siegel has resigned, effective at the end of the school year.

Mills said the high school will also have a new assistant principal, but didn’t say who it would be.

Also, Allison Goodenow will be the principal at the Lake and Osgood/Ladybug Crossing preschool in 2022-23. Goodenow is a teacher.

Employees who are resigning at the end of the school year are Laura Miller, Megan Maassen, Tonya Townsend, Reva Siegel and Micah Fisher.

Mills said he filled 11 open staff positions before Jan. 1 and is making good progress toward filling the rest of the openings.

Also, the board approved a five-year lease of part of the Osgood school building to Ladybug Crossing for continuing to provide daycare services in conjunction with the district’s preschool classes. The lease is for $1,245 a year.

In other business, the board agreed to leave the officers of the board the same for the coming year. Altig is the president. Jo Ann Lundgreen is the vice president. Peterson is the secretary.