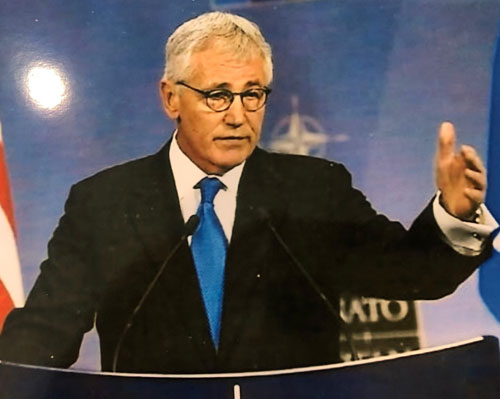 Had the second world war ended differently, democracy would have died, former U.S. Secretary of Defense and U.S. Sen. Chuck Hagel of Nebraska reminded readers recently in an interview with the Nebraska News Service.

Hagel said people have since taken it for granted, with multiple new threats placing democracy in peril once again.

However, Hagel said the United States, unlike some other democracies, can self-correct and improve the country.

“I think we’ve forgotten what happens when you don’t pay attention to democracy, and you don’t support it,” Hagel said. “It doesn’t take a world war to do it, but the generations after World War II and the World War II generation understood that we were right on the brink. America was close to losing its democracy if the war would have gone a different way.”

As the only Vietnam War veteran and the first enlisted combat veteran to serve as secretary of defense, Hagel has decades of public and private service under his belt, all of which he said have focused on helping others.

Hagel, a self-described “simple, common man from the prairie,” served as a Nebraska senator from 1997-2009 and defense secretary from 2013-15 under President Barack Obama. Under President Ronald Reagan, Hagel was the deputy administrator of the Veterans Administration, the number two at the department.

But, Hagel said, it’s the concept of democracy that has given him the freedom and privilege for these opportunities.

“Public service is one of the most rewarding areas of pursuit I think any human being can focus on,” he said.

Hagel has continued to speak out about threats to democracy after leaving the defense department, writing multiple columns with his fellow defense secretaries on the dangers of involving the military in election disputes and of the political polarization in the military.

He also pointed to democracy “being seriously threatened by terribly irresponsible, heated, dangerous rhetoric about our institutions of government” — including by some current and former officials saying the FBI and Department of Justice are “enemies of the people.”

“Those are all very clear demonstrations of how much they put this democracy in peril, and I’m concerned going forward about all of this,” Hagel said.

Every U.S. citizen has a responsibility to make this democracy work, Hagel added, with one way to do so to be informed, pay attention and be aware of what’s going on.

“I think an informed citizenry is the key to an effective democracy because, without it, it can’t work, a democracy can’t work,” Hagel said.

“In the legacy of his life, I would think that would be one of the most important things: you have got to take care of the guy on the ground,” Linehan said.

Linehan said Hagel is an extraordinary guy who does not back down from what he knows is right and who is always working hard. At the end of workdays, she said Hagel would also make sure everyone got together and would tell jokes.

She also pointed to Hagel’s opposition to the war in Iraq as one of his commitments to believing in people, even as he took many hard political hits.

“He never backed down because he knew that kids would get killed, and he knew that we were getting into something we didn’t understand,” Linehan said.

She said emotions were high and much of the country was acting out of fear and anger.

Linehan recalled Hagel buying a tie for a man with down syndrome who worked in the U.S. Capitol.

“He believes that we owe it to the generations that are behind us to leave the world better than we found it,” Linehan said. “That was always his North Star.”

Hagel said everyone must come together for the good of the country, remembering how he would remind his colleagues through speeches on the Senate floor that their oath of office was not to a president or political party, but to the country.

Democracy requires compromise, Hagel said, and people must have the ultimate focus and objective in mind to do what’s in the best interest of the country.

The Nebraska News Service is produced by the University of Nebraska-Lincoln College of Journalism and Mass Communications.