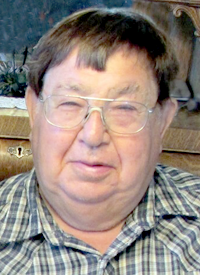 Charlie Clair ‘Chuck’ Holmes, 85, of Hershey peacefully passed away with his family at his side on Sunday, Jan. 9, 2022 due to complications from Parkinson’s. He had placed his trust in Christ at an early age and is now with his Savior in heaven in a fully restored body.

Charlie was the youngest of 11 children born to Arthur and Lucy Holmes. He was born in a sod house in the Sandhills of Loup County on March 12, 1936. He graduated from school in Taylor, and then began teaching in rural area schools for four years.

Charlie was drafted into the Army in 1958 and was eventually posted at El Paso, Texas, where he served as an operating technician for two years. After his discharge, he attended Kearney State College where he earned his BA in Elementary Education and later received his Master’s Degree.

While in college, Charlie met his future wife, Joyce, and they were married on June 3, 1967; the couple had three children and were married for 54 years.

Charlie taught and coached in Thedford and Mullen before settling in Hershey in 1969. Charlie and Joyce moved to Hershey when he accepted a position as the elementary principal. He also acted as assistant guidance counselor, taught two classes and helped coach football. After six years, Charlie moved back into full-time teaching and taught 6th grade then 5th grade at Hershey.

He retired from teaching in 1998 then worked at the Golden Harvest Seed company but remained active in the Hershey school community. He was on the first Hershey Teammates board and served as a mentor.

Charlie was also active in the Hershey community. He and Joyce were one of six families who helped start the Hershey Baptist Church in 1979. One of his roles at the church was as the Commander of the AWANA Club that was held on Wednesday nights. Many children in the Hershey area were a part of and benefited from this program.

Charlie was passionate about pointing children to the Lord and he continued in that role for 34 years. He joined the Hershey Lion’s club in 1970, helped with the Fall Festival parade for many years, and was a member of the American Legion Post #279 where he served as chaplain for several years.

Charlie enjoyed being a part of a large family and made staying connected with them a priority. Many vacations and trips were centered around family reunions and events. He also loved looking for treasures and antiques at auctions and garage sales.

Charlie is survived by his loving wife, Joyce of Hershey; daughters, Sherilyn (Sam) Park of Omaha and Rhonda Holmes of Lincoln; his two treasured grandchildren, Claremarie and Camden Park, both of Omaha; his sister, Edith Dilsaver of Wichita, Kan.; and many nieces, nephews and other loving relatives.

He was preceded in death by his beloved son, Bradley; his parents, Arthur and Lucy; brothers, Otho, Maurice, Hank, Art and George; and his sisters, Agnes, Myra, Helen and Hazel.

Services will be held on Monday, Jan. 17. Burial with military honors will be at 10 a.m. in Ft. McPherson National Cemetery. Memorial service will follow at 11:30 a.m. at the Hershey Baptist Church. Visitation will be Sunday from 1-6 p.m. and with family receiving friends from 4-6 p.m. at Odean Colonial Chapel, which is in charge of arrangements.

In lieu of flowers, memorials can be made to the Hershey Volunteer Fire Department, Hershey Teammates program or Hershey Baptist Church. Online condolences may be shared at odeanchapel.com.