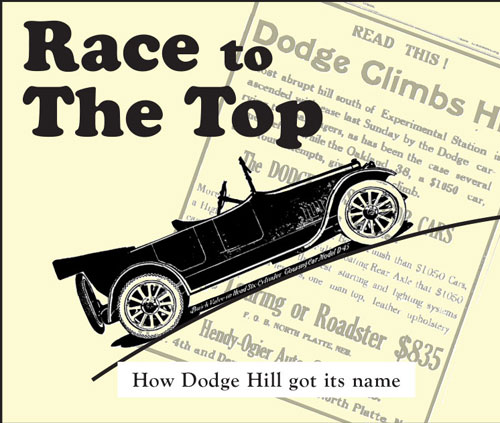 The North Platte Bulletin received awards Saturday from the Nebraska Press Association for writing, use of color, community outreach and sponsored events.

Competing against some of the largest weekly papers in Nebraska in 2021, our three feature reports on how Dodge Hill south of North Platte got its name was honored as one of the best news feature series of the year.

The series was written by George Lauby at the suggestion of former radio station manager Rob Mandeville. It told about the battle for prestige and sales among the city’s auto dealers of the early 20th century. A Dodge automobile was said to be the best at climbing the hill, but Buick was not to be ignored and Oldsmobile got into the act too.

The series was bolstered by the perspective of the Lincoln County Historical Museum Director Jim Griffin as well as an actual 1919 photo of a Dodge going up Dodge Hill, from the collection of photographs assembled by the late Jim Beckius.

The Bulletin was also praised for its “newspaper organized or sponsored event” — the Music on the Bricks celebration in August.

“Media companies are moving more and more in the direction of events, and they should,” the judges said.

The Bulletin was honored for its use of color a two-page center spread called “Greenscapes: Yards of the Year.” The layout depicted winning yards in a contest organized by Keep North Platte and Lincoln County Beautiful and the Bulletin.

KNPLCB Executive Director Mona Anderson took the photos and the Bulletin’s Layout Editor Martin Owen arranged them on the pages.

Also, a Bulletin subscription box was honored for its effectiveness in contacting readers about the merits of a newspaper, contrasted with the frequent snarky comments on social media. Editor George Lauby came up with the idea and Martin Owen designed it.

It was the first time in two years that our busy staff took time to enter the contest. North Platte High Bulldogger Editor Jonathon Dekleva helped prepare the entries.