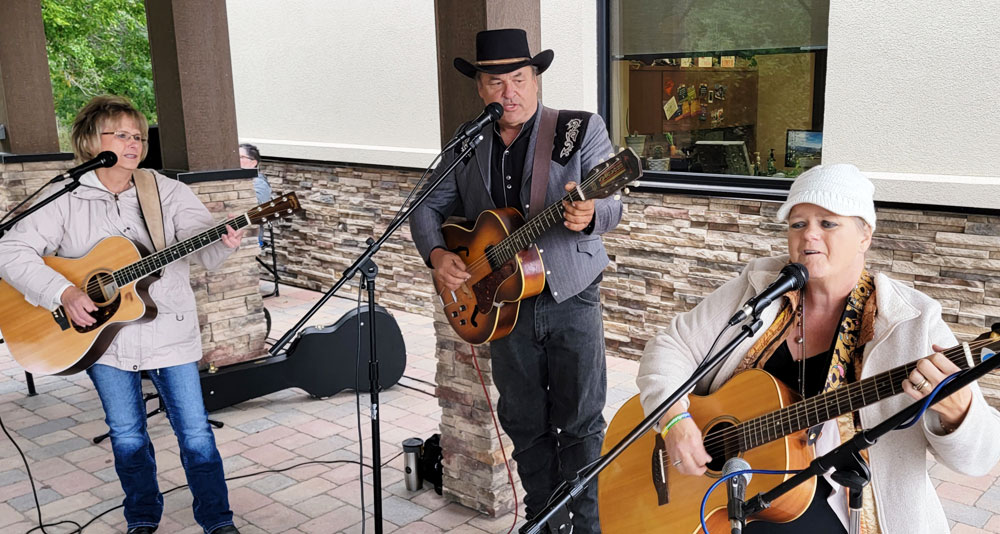 On Thursday, classic country musicians Barb Dvorak and Brenda Cohn, with Jim Calhoun on lead guitar, performed at the September series of live music called Beat on the Patio.

Featuring some of the best musicians in the North Platte area, patio shows are hosted by Visit North Platte from 5:30-6:30 p.m. every Thursday during September on the patio of the Visitor’s Bureau.

Dvorak and Cohn are sisters as well as musical partners and are noted for their outstanding vocals. They grew up in a musical family near Stapleton and played with Johnny Main’s band, The String-a-Longs, in high school. In the mid-80s, they formed the band Midnight Flyer, playing country-western and early rock and roll throughout the area for a decade.

Dvorak plays several instruments – guitar, keyboard, bass and drums. She and music legend Roger Lee Beckett played for several years as Nightlife, performing with musicians around the country and rubbing shoulders with some of the best in the U.S.

Likewise, Cohn has played in bands throughout the years on rhythm guitar and vocals. She has five albums of mostly original songs to her credit.

Jim Calhoun is a member of the Nebraska Country Music Hall of Fame and enlivened the song with perfectly timed lead riffs, chimed in on harmonies, and sang three songs.

The audience wore coats. Despite the cloudy skies and cool breeze, the musicians clipped right through their hour-long set and were warmly received.

They presented a mix of classic country songs and originals.

Next, George Lauby and John Martin will play roots and folk music in the final show of the series on Sept. 29.

There is no charge to attend. Bring a camp chair and any refreshments you like. The patio is on the east side of Jeffers St./ US 83, between I-80 and the South Platte River. Turn east into Halligan Drive and take the first left turn to the edge of the river.

If it is raining, the show will move indoors at the Ramada Inn/ Sandhills Convention Center on the west side of U.S. 83.