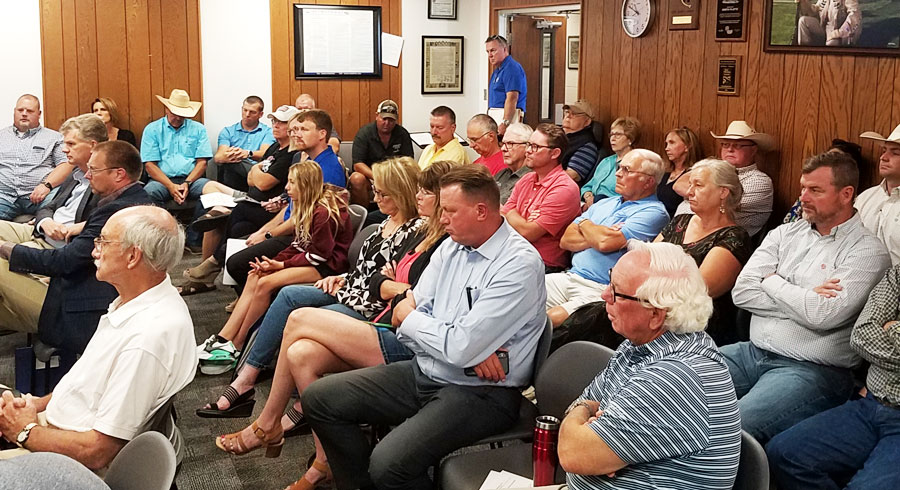 The proposed Sustainable Beef processing plant will likely receive $1 million to help pay for the studies to launch the project.

The city council chamber was full, accommodating about 50 people.

The money will pay about 10% of an estimated $10 million cost of engineering, architecture, planning and other professional services for the proposed plant, CEO David Briggs said.

If the city council approves, the money would be awarded in the form of a loan that would be completely forgiven when the company reaches a $20 million payroll. Meanwhile, interest would accrue based on the prime rate.

“Lincoln County is one of the top five cattle production areas of the world,” he said. He noted that cattle feeders are plentiful in the area, thanks to a ready supply of corn and he said Nebraska beef is the best beef, highly regarded around the world, he said.

Briggs hopes to break ground on the project this fall and be operating by the fall of 2023, although he expects it will take another year to reach full production. He told the committee it is important to break ground this fall, or six months of time would be lost.

He said there is a lot of excitement in the industry about the plant.

“Lots of people are watching to see if it is going to work,” he said. “(We believe that) people will fight for this product.”

Briggs said the estimated cost was $236 million when the project was first conceived, but the estimate has increased to $325 million due to sharply higher costs for building materials.

He said the plant would employ 875 workers, and is expected to generate another 1,000 jobs in supporting businesses. He said the location is ideal, within one mile of I-80 and along Newberry Road, a highway link that is expected to be expanded to four lanes in coming years.

He said the plant would operate only in the daytime, with a single shift and wages that will be very attractive to workers.

Citing a study by Creighton University Economist Ernie Goss, he said the plant will generate $1 billion for the North Platte economy.

Committee member Kim Steger asked about the impact on the environment. Briggs said consultants are studying that, and the company will abide by the laws.

“We have a lot of firms working on that,” he said.

“Are you far enough along to know if it is a ‘buildable’ site?” Committee member Bob Phares asked.

Briggs said he did not have the final architectural drawings yet, but designers are “working on that right now. We’ll have it before we break ground.”

At the urging of Committee member Brock Wurl, the committee converted the grant request into a forgivable loan. Wurl also asked for a letter of credit so “if something goes wrong, we are not out $1 million.”

Briggs reminded the committee that the application was for a grant, not a loan. He said it could take 90 days to provide a letter of credit from a bank. But committee members Josh Harm and Pat Keenan agreed with Wurl, and suggested the loan could eventually be forgiven to make it work well for the company. The committee also added the stipulation that the money would not be awarded until a redevelopment plan is submitted, which is part of a tax increment financing application.

“It (the requirements) is the responsible thing to do, in my opinion,” Harm said.

In answer to repeated questions, Briggs admitted that the requirements would not impede the project, as long as Sustainable Beef could provide the letter of credit when it becomes available.

The committee approved the grant unanimously. But before they did, Mayor Brandon Kelliher allowed 20 minutes for public comments at Wurl’s urging.

The first commenter voiced concern about depleting the part of the Quality Growth Fund that is dedicated to small businesses.

Chamber and Development President Gary Person said the Quality Growth Fund is truly intended for a large project such as this one. Person added that 10% of the revenue for the growth fund (which comes from city sales taxes) is earmarked for small business, and that part currently totals $900,000. It cannot be accessed for large projects.

Person strongly supported the project. He said it would be “a game changer” in the economic development of the area. He said there is not a better fit for the culture of cattle country, and added that he’s ready for the challenges.

Dee Fugate, a relative of two residents who live between the proposed site and the confluence of the North and South Platte Rivers, said the project must have started long before the public was informed. She said the public has not had adequate time to voice their opinions.

Fugate voiced concern that the area would flood, and that the schools and hospital would become overwhelmed. However, she said she’s not against the project, just the location.

A cowboy spoke and said it is important that the ranching industry create opportunities for their children, and the city’s financial contributions would show their long-term commitment to a sustainable beef industry

Resident Doyce Williams said the plant would create odors for residents who live on the east side of the city, including some hotels. He said rendering, including the process of dehydrating 10,000 gallons of blood each day, creates odors,

Resident Greg Wilke said every big opportunity comes with some risk. He pointed out that there are water abatement berms around the proposed site.

“Everyone talks about value-added agriculture,” Wilke said. “This is it.”

Phares reminded the audience that the city council will make the final, ultimate decision. He said no one will be excluded from any regulations.

At one point in the discussion, Alan Erickson said he’s lived in North Platte for 40 years, and remembers the days when there were four packing plants in the city. He said the plant presents issues, but technology is improving all the time and Sustainable Beef will meet or exceed all the requirements.

“I believe our system is effective,” he said. “Let’s get ‘er done. Forty years is a long time to wait for growth in our city.” He received some scattered applause.

If the council approves, the money would come from two sources — half from a Northwestern Energy fund that comes from a surcharge on gas bills, and half from the Quality Growth Fund.

In other business, the committee also recommended awarding $200,000 a year for 10 years in a grant to establish an industrial Rail Park. That money will match up to $30 million from the state of Nebraska, Person said, enough to get the park rolling. Person said two companies are already actively interested in the location and urged the city to be ready to apply for the state funds as soon as the money is available in early August, because other cities are also interested in the money.

“It will be first come, first served,” he said.

Person said the two companies who are most interested in the park are considering investments of $70 million and $30 million, respectively.

The city council will have the final say on that fund too. It is expected to be on the agenda in early August.

Nebraskaland Days: ‘No thanks, pardner‘