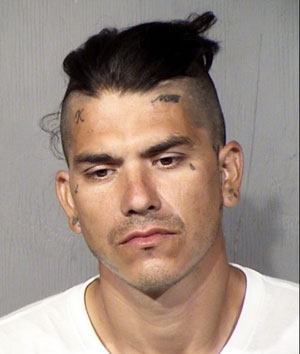 Anthony R. Nunnenkamp when he was booked into the Maricopa County Jail

Inmate Anthony Nunnenkamp escaped from the Lincoln County jail in July, one of the few inmates ever to escape from the 10-year-old detention center.

Recently, Nunnenkamp returned to the county jail and one thing is certain — he is not going to escape again, Chief Lincoln County Deputy Sheriff Roland Kramer said.

Nunnenkamp, then 36, got away clean in July, With the help of another inmate, and disappeared from authorities for four months. But he got into a fight with a woman by the name of Claire Demoney in Phoenix, Ariz., and the assault tripped him up in early November.

He was arrested Nov. 5, charged with domestic assault, and giving false information to the police. He was arrested about 18 miles north of downtown Phoenix, near a major exit of Interstate-17.

That assault put him behind bars in the renowned Maricopa County jail.

The Phoenix police contacted the Lincoln County sheriff’s office after they discovered Nunnenkamp’s true identity and that he was wanted in Lincoln County. They asked if Lincoln County would pay for extradition back to North Platte.

Nunnenkamp was held on a $150,000 bond when he slipped away from the Lincoln County jail on the evening of July 9. He’d been incarcerated for 10 months. He was facing charges of possession of a stolen handgun as well as prescription pills. He’d been charged with illegal possession of firearms so many times that he was regarded as a habitual criminal.

In jail, Nunnenkamp appeared to work diligently to establish a foundation for a better life. He was well behaved and his participation in counseling was impressive. After several months, he was granted “inmate worker” status, which allowed him to do some work around the jail without constant supervision.

He was doing some of that authorized work — mopping up the sallyport — when he found a way to get away.
The sallyport is an enclosed garage on the back of the jail where vehicles drop off or pick-up inmates. Although Nunnenkamp was restricted to the indoor sallyport, he had help from another inmate who had greater liberty.

After mopping for a while, he closed himself in the mop closet and hid there. Another inmate with broader privileges who could go outside eventually opened the door of the sallyport, and Nunnenkamp got away.

It was a coordinated plan that several other inmates were aware of, Sheriff Jerome Kramer said.

Authorities suspected Nunnenkamp headed to Colorado, where he had a girlfriend and other business, but he also faced other criminal charges in Colorado, so authorities were really not sure where he went. Efforts to find him were unsuccessful.

After he turned up in Phoenix, he served time in the Maricopa County jail. Then, he was then sent to Colorado to face charges there. With that resolved, he was brought back to Lincoln County.

This time, he will stay under close watch.

“He won’t leave his cell without an escort. He can complain all he wants, but he’s not going to,” Chief Deputy Kramer said. “Inmates can sit around all day and find security weaknesses if they are there. They can be very crafty in that way. He discovered a weakness, thought it through, and was able to get away.”

“But we learn from those,” Kramer said.

“He won’t be getting out next time until his case is adjudicated – until he is either freed or sent somewhere else by a judge,” Kramer said.

(This report was first published in the Bulletin’s April 7 print edition.)