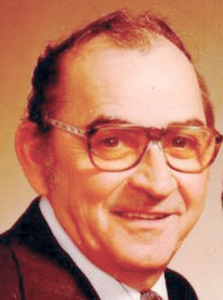 He was born on Feb. 3, 1927 at Stapleton to Ray and Margaret Crewdson.

He attended Lincoln and Jefferson Elementary and North Platte Senior High. While attending high school, he sorted and cleaned bottles at Pepsi, cleaned the Depot, worked part time delivering towels for Ideal Linens and also took over after his father cleaning First National Bank and McDonalds.

After returning home from his military service, he married Creta Mae “Skeets” Spaulding on Jan. 26, 1950 and to this union, two sons were born: Mark and Gordon Crewdson. He worked for Hipp Wholesales where he was a traveling salesman and later the vice president, retiring in 1988.

He established and owned his own business called Jerky Man Vending Company which he operated until selling the business in 1996.

He was a member of the Elks Club, Moose Club, Eagles Club, VFW and American Legion in North Platte. He also helped organize and was a charter member of the Manatoba Archery Club at Lake Maloney.

He enjoyed gathering mushrooms, collecting arrowheads, and hunting a variety of animals. He was one of the first seven people to receive an archery permit in Halsey National Forrest and was fortunate enough to harvest a deer.

He loved baseball, where he played semi-pro and enjoyed softball and golf. He was a catcher for Gene Brase when they played exhibition matches in local towns on the weekends. He spent time playing horseshoe and fishing at their cabin at Lake McConaughy.

He is survived by his sons, Mark (Teresa) and Gordon (Susan) Crewdson, both of North Platte; grandchildren and their spouses, Darcie and Tony, Nathan and Crystal, Josh, Sara and Troy, and Derek and Charity; and numerous great-grandchildren.

He was preceded by his wife of 61 years, Cleta; parents; two brothers; and six sisters.

Memorial services will be at a later date. Carpenter Memorial Chapel is entrusted with arrangements.

Memorials may be made to the Salvation Army Food Pantry. Online condolences may be directed to carpentermemorial.com.