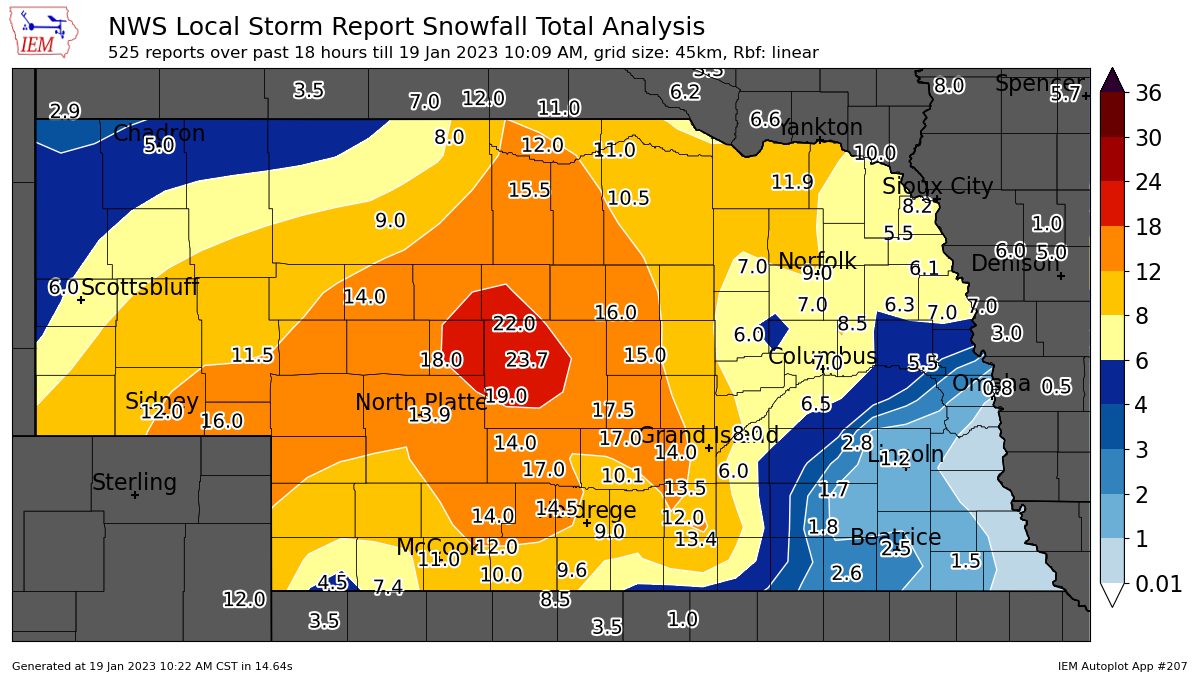 If you felt like it snowed a lot Wednesday, you’re spot-on accurate.

Top Photo: Snowfall totals throughout the area. Tap on image for full view.

An all-time record amount of snow fell in North Platte of any 24-hour day since 1875 — the first year that consistent records were kept.

The National Weather Service in North Platte reported the official snowfall total was 13.9″ Wednesday when all was said and done.

As predicted, the heaviest amount fell in northern Custer County – as much as two feet in the Broken Bow area.

Snowplows and snow blowers big and small worked furiously Wednesday and Thursday, especially during the night and before dawn, opening North Platte streets, parking lots and roads, and the work continued most of the day and into the night.

Except for dozens of snowplows, pickups with blades and similar vehicles, traffic was sparse in the early morning but the skies cleared around 11 a.m. By then, the city was coming to life.

On streets and roads that had been cleared, most of the snow melted during the afternoon, showing bare pavement again. By nightfall, most of the sidewalks and driveways were scooped out.

I-80 opened Thursday afternoon but U.S. 30 remained closed as of 8 p.m. by order of the Nebraska State Patrol. Many of the state highways north and northeast of North Platte remained closed.

The Lincoln County Sheriff’s Office responded to five wrecks on Wednesday, including a pickup that nearly went off the U.S. 30 overpass east of Sutherland. No serious injuries were reported. Deputies helped seven vehicles that were stuck or stranded, Chief Deputy Rolly Kramer said.

Nebraska State Troopers responded to more than 400 weather-related incidents over the last two days as snow and ice accumulated across Nebraska, responding to 42 crashes and helping 385 motorists who slid off the road or who got stranded in the snow.

North Platte police said there were no accidents Wednesday in the city limits, but there were four on Thursday.

Wet surfaces refroze during the night, a pattern that is expected to continue. The temperature fell to 5 degrees Thursday night in North Platte, so roads, streets and sidewalks were slick once again. Plenty of caution is advised.