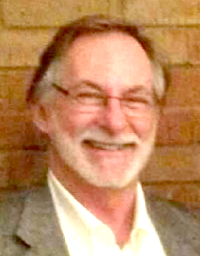 Born on March 18, 1958 in Ogallala, the son of Samuel Alexander and Leona Rose (Brant) Gill. He was the oldest of four children, twin sister Julie, Kathy, and Samuel. He grew up in Big Springs, and graduated high school in 1976. During his high school years, he played football and took part in one act plays.

Twenty-eight years ago, Vince met the love of his life and best friend, Patricia. They were married on April 3, 1993 in Big Springs.

Vince drove a transport truck for Bosselman’s for 26 years, and then worked at Thrivent. In 2005, Vince began working for the Union Pacific Railroad as a conductor and the couple eventually moved to North Platte in 2009 so he could be closer to work.

There are so many great memories about Vince that will always be cherished. He loved to ride his motorcycle, loved his dog Bella and taking her to the dog park and the lake.

He was a hard worker, a handyman, enjoyed woodworking, enjoyed helping Whatever he happened to be doing, he was always listening to music, anything from Ozzy Osborn to classical.

Vince was always willing to help and listen to others. He loved his family deeply, especially his children and grandchildren, offering guidance to them and providing them with unconditional love. He taught them many things, including how to play chess.

He was a voice of reason and always a friend. Vince could make you laugh no matter what.

He was a believer in the Lord and a member of Beautiful Savior Lutheran Church. The Christmas Eve service was favorited by Vince.

Preceding him is death was his father, Samuel Gill.

Funeral services will be held at 10:30 a.m. on Tuesday, July 20 at Beautiful Savior Lutheran Church with Pastor Bob Deardoff officiating. Book signing will be 9 a.m.–5 p.m. Monday, July 19, 2021 at Adams & Swanson Funeral Home, which has been entrusted with arrangements.

In Lieu of flowers, memorials are suggested to Fur the Love of Paws. Online condolences may be shared at adamsswanson.com.