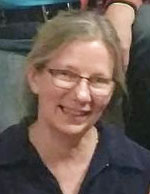 Veronica Lauby Powell, 59, of Kearney, NE, loving mother, wife, sister, and grandmother, was taken suddenly from her loved ones on Saturday March 27, 2021.

Veronica was born on July 16, 1961 in Lexington, NE to Christian Lauby and Leota (Wheeler) Lauby. She attended St. Anne’s High School and Catholic Church, lived in Denver, CO, then attended the University of Oregon in Corvallis with plans of becoming a veterinarian. She was united in marriage on June 9, 1990 in Denver, CO to Paul Powell, originally of Rochester, NY.

In 2000 Veronica and Paul returned to Kearney, NE to be close to her family; Veronica homeschooled their four daughters through their high school years. She was an avid reader, enjoyed taking long walks, and talking to her grandsons Jack and Asher on the phone. Veronica was also deeply committed to her spiritual life — over time she became interested in Hindu philosophy and its teachings. She studied and practiced for decades, with a strong focus on the writings of contemporary spiritual activists Amma and Sadhguru.

There will be no public services or visitation, but a private memorial for the family has been arranged. Veronica would have asked that in lieu of flowers or cards, donations be made to the International Charities at www.amma.org.