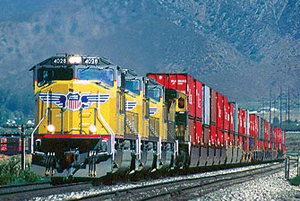 Three major railroad unions announced Oct. 15 they are jointly challenging Union Pacific over what the unions describe as a “series of unilateral and unlawful actions taken by the carrier recently.”

SMART-TD and BLET as well as the BMWED (Brotherhood of Maintenance of Way Employees) have stated their opposition to the company requirement that members get the COVID-19 vaccine.

However, some workers think the effort is lukewarm.

A Bailey Yard worker in North Platte said the company and the unions “want to appear to be fighting for us so they don’t lose members. It’s time for the Unions to put up or shut up. In the UP’s own lawsuit, they stated that the vaccine mandate was the law when no such law exists.”

“However, we have several objections to UP’s unilateral implementation of their policies mandating them and illegally dealing directly with its represented employees,” Ferguson and Pierce said.

Employees who aren’t fully vaccinated by Dec. 8 risk being medically disqualified from work, they said.

“We have been in contract negotiations with UP since November 2019, and federal law absolutely bars railroads from changing rates of pay, rules and working conditions while negotiations are ongoing,” the labor leaders’ statement said. “Not only is UP in violation of the law, it has explicitly spurned our demands that these matters be bargained.”

In UP’s lawsuit, spokeswoman Robynn Tysver said UP seeks to have any dispute over the mandate resolved through the various dispute resolution procedures outlined in the Railway Labor Act.

“We look forward to the court’s help in that effort,” Tysver said.

The debate over both corporate and federal vaccine mandates has taken to the skies as pilots vocally push back against the requirements, the Western Journal reported.

Just a week after the “weather” resulted in more than 1,000 Southwest Airlines flight cancellations amid rumors that pilots staged a “sick out” to protest the company’s mandate, the CEO of Delta Air Lines flat-out said he opposes the mandate and doesn’t need one to get his employees vaccinated.

Delta CEO Ed Bastian told Fox Business News that refraining from enforcing the “divisive” federal mandate for his employees has been an effective tactic and that the company is approaching a nearly 100% vaccination rate without the mandate.

“By the time we’re done, we’ll be pretty close to fully vaccinated as a company without going through all the divisiveness of a mandate,” Bastian said. “We’re proving that you can work collaboratively with your people, trusting your people to make the right decisions, respecting their decisions and not forcing them over the loss of their jobs.”

Under Chicago Mayor Lori Lightfoot’s rules, officers had to confirm their vaccine status or be subjected to unpaid leave by Friday. Unvaccinated officers can stay on the job if they undergo semiweekly testing.

“The unofficial number we have is about over 3,200; so about of third of the department,” Catanzara told CBS 2, calling the mandate illegal. The police union head told the news outlet that the rules should be null and void because city officials didn’t negotiate with the union.

Thousands of parents, students and teachers walked out of school and onto the California State Capitol lawn in Sacramento, all in protest of the state vaccine mandate, CBS Sacramento reported.

A crowd of about 2,000 from all across the state converged on the state capitol Monday afternoon, Oct. 18.

Hundreds of people — most of them Department of Education staffers — protested the agency’s COVID-19 vaccination mandate as it went into effect on Monday, Oct. 4.

The crowd gathered outside DOE headquarters in Brooklyn, waving American flags and holding signs that read “My Body My Choice,” “We gave everything and now we’re nothing” and “Choice not Mandates.”

“I just think this should be a personal choice,” one veteran Brooklyn special education teacher told The New York Post.