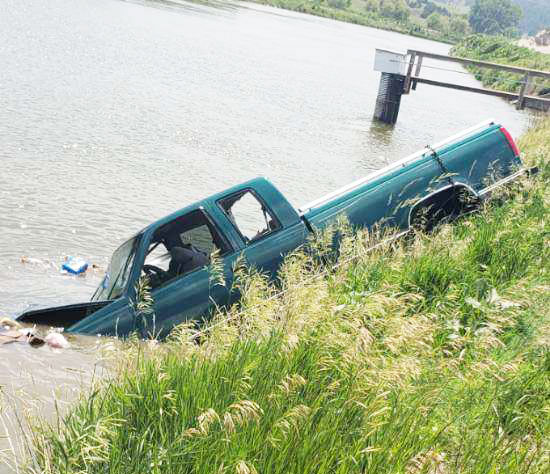 Pulling the pickup from the canal.

Two bodies were pulled from the canal west of Fort McPherson National Cemetery around 2 p.m. Thursday, after the driver of a pickup apparently lost control and the vehicle rolled into the water.

Two employees of the Central Public Power and Irrigation District reported the crash and by the time troopers arrived, they had extricated Alex Sanchez, 74, deceased, from the pickup. A dive team soon arrived and extricated a deceased woman from the wreck, identified as Kimberly McCarter, 52, of Papillion, Nebraska State Patrol spokesman Cody Thomas said.

Sanchez was a concrete contractor, taking great pride in his work, his obituary said.

Troopers believe the pickup was traveling along the canal road when it went out of control. The road is rutted in the area and the pickup had just gone around a gentle curve, the sheriff’s office said.

The sheriff’s office said the pickup was found on its side in the water, 80-90% submerged.

The time of the crash in unknown is not yet known but was probably within the prior 24 hours. The investigation is continuing, Thomas said.

Thomas said troopers were dispatched to the scene, about two miles west of the cemetery, around 1:45 p.m.