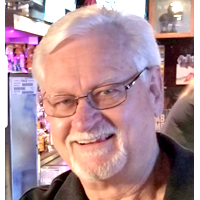 Steve was born Jan. 6, 1946 in Brooklyn, N.Y. to Percy M. Kruse and Frances (Molyneaux) Kruse. His family moved to Grand Island shortly after Steve was born.

He graduated from Grand Island Senior High in 1964. He was a member of the Nebraska National Guard and served in Vietnam. After he returned home, he graduated from Kearney State College in 1971. He was honorably discharged in 1972.

He was united in marriage to Nancy M. (Ward) Kruse on April 26, 1968 in Grand Island where their son Brian was born. The family moved to Columbus after Steve found work as a manager with Lindsay Manufacturing Co. While living in Columbus their daughter Kerri was born.

In 1978 the family moved to North Platte and Steve began working for the Union Pacific Railroad, first in the yards, then as a brakeman, and ultimately as a conductor. He retired in August 2007.

Steve loved spending time with his family. He also loved the outdoors, including hunting, fishing, and camping. In his retirement he and Nancy loved vacationing together at the beach and watching their grandchildren’s sporting events.

Book signing will be 9 a.m.-5 p.m. on Monday, April 5 at Carpenter Memorial Chapel.

In lieu of flowers memorials are suggested to Wreaths Across America to support the gravesites of our fallen Veterans. Online condolences and sharing of memories may be directed to carpentermemorial.com.