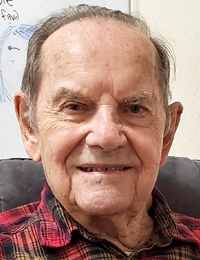 Stephen G. Fleck, “The Chief”, 101 (and a half) years, went home to the Lord, shortly after midnight on May 7, 2022. Chief took his final breaths surrounded by his loving family and the caring staff of Premiere Estates in the place he called home.

Steve was born “one Frosty Winter Morn” Nov. 16, 1920 to Michael Fleck (a German immigrant fleeing Nazi rule) and Mathilda Gerhardt in Timmer, N.D. Steve was the oldest first-born son, preceded in death by Anna, his older sister, who died in the 1919 flu epidemic.

Even though Steve had 6 siblings, Steve was the apple of him mom’s eye and the family lived on a farm near Solen, N.D. Times were very hard, the family survived by farming during the Dirty Thirties drought. Steve’s dad, Michael, passed away Sept. 21, 1937, but during one of Steve’s hospital visits to his dad, Steve’s dad told him he felt sorry for him, knowing his son would be tasked with taking care of his mom and siblings. Steve cared for his family by farming, working in the beet fields, sacking potatoes and joining the Civilian Conservation Corp for 6 months.

Steve graduated High School in 1939 in Solen. With the beginning of World War II, Steve, one of the Greatest Generation, joined the Navy in 1943 as a radio operator being very proficient in Morse code and a German interpreter to the prisoners.

After Steve’s discharge from the Navy in 1945, Steve moved to Kansas City, Kan, where he met the love of his life, Ruth Dennis. Steve and Ruth were married Nov. 30, 1946. Steve got a job with the Federal Aviation Administration and often told the story about how the man doing the hiring was very moved by Steve’s Catholic faith and asked him “Where were you 6 months ago?”

Steve and Ruth were transferred several times during his career and Ruth always wondered where she would put up next year’s Christmas tree. Several years and 6 kids later, Steve and Ruth settled in North Platte in 1965 and made it their home for the rest of their lives.

Steve loved his family, and he and Ruth followed them as they participated in various sports activities. Steve was a master accordion player and a family favorite was “You Are My Sunshine.” He also enjoyed winning at the slot machines as he chauffeured Ruth to many gambling trips to Rosebud.

Steve was a very humble man, and embraced and loved his Catholic faith, attending Saturday night mass at St. Patrick’s Church until he became housebound just a couple of years before his death. Steve prayed the rosary every day…and as a young parent gathered his family around the bed for a family rosary every night during Lent. Steve often wondered why God kept him around so long…we all knew he was left here to pray for his family.

Steve leaves behind a legacy of humility, love, and the best Coffee in town. He was the Coffee Shop for both 11:00 Boys Club and the evening sisters Therapy Sessions. Sitting, listening, singing, dancing, offering advice, therapy, debate, love and birthday wishes. Walking Grandpa to lunch was an honor that will be missed by all. Steve & Ruth are now reunited serving Flecks Heavenly Special Brew in the Lords Coffee Shop. Ich Liebe Dich, Machs Gut, Auf Wiedersehen! Love, Take care, Goodbye! Waiting for you to flicker your porch light, Dad, from Heaven’s door.

Christian Wake Service will be 7 p.m., Sunday, May 15 at Saint Patrick’s Catholic Church. Mass of Christian Burial will be 11 a.m., Monday, May 16 at Saint Patrick’s Catholic Church with Rev. Josh Brown as celebrant. There will be a reception following mass in the hall. Burial will be at 2 p.m. at Fort McPherson National Cemetery near Maxwell. Visitation will be noon–4 p.m., Sunday at Adams & Swanson Funeral Home, which is in charge of arrangements.

In lieu of flowers, memorial donations can be made to St. Patricks’ Church or North Platte Catholic Schools Endowment Fund.