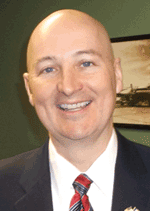 Gov. Pete Ricketts and other state leaders announced Monday their intention to protect Nebraska’s share of the South Platte River water by building a major canal in parts of Colorado and southwest Nebraska.

Ricketts highlighted the emerging need to protect Nebraska’s South Platte River water, which is threatened by nearly 300 planned projects and more than $10 billion of expenditures in Colorado to ensure no “excess” water leaves its state. This threatens to choke off 90% of the flow of water into Nebraska, he said.

Ricketts said the 1923 South Platte River Compact specifically provides Nebraska with authority over water and land in Colorado for the canal project.

He said $500 million in funding for the project will be included in his proposed budget, which he will share with the Legislature on Thursday.

“Given the state’s strong financial position, budget resources are available to undertake this historic project without incurring a penny of debt,” he said.

Ricketts said Nebraskans have been great stewards of water. As an example, the state has maintained the Ogallala Aquifer, on average, within one foot of it’s level in the 1950s.

Nebraska Attorney General Doug Peterson said the South Platte River Compact, signed in 1923, divides the waters of the South Platte, ensuring certain flows will be delivered to Nebraska at the state line near Julesburg, Colo.

Construction of the canal and storage system (referred to as the “Perkins County Canal” when the compact was signed) along the state border will preserve Nebraska’s sovereign right to its share of the South Platte River water into the future, Peterson said.

Speaker of the Legislature Mike Hilgers proposed a number of plans to enhance Nebraska’s existing water assets and create new water resources for Nebraskans to enjoy, enumerated during the past six months by the Legislature’s Statewide Tourism and Recreational Water Access and Resource Sustainability (STAR WARS) special committee.

The committee is unanimously recommending them for approval by the Unicameral. Among the plans, the STAR WARS Committee proposal calls for:

The proposals presented Monday are contingent on legislative approval and will be discussed by senators during the Unicameral’s 60-day session that began Jan. 3.