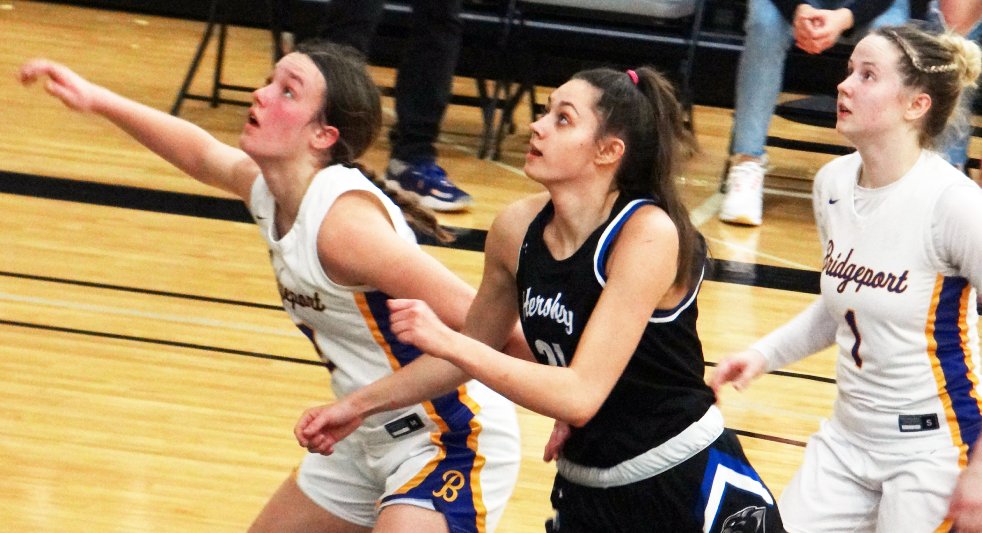 Bridgeport showed their might on Saturday in their 85-41 win over Hershey in the South Platte Valley Association tournament finals.

Ruthie Loomis-Goltl, the 6’4″ senior for the undefeated Lady Bulldogs, nearly outscored the Panthers by herself, scoring 40 points.

Ruthie’s sister, Olivia Loomis-Goltl, had 20, including the game’s first point on a free throw. Hershey (14-3) took the lead on a basket by Emma Hall.

It was the Panthers’ only lead of the game. The Loomis-Goltl sisters combined for the next two buckets. Then Ruthie scored two more to make it 9-2.

Hershey came within 10-7 on a three-pointer by Hall. But Bridgeport (14-0) scored the next nine to lead 19-7 at the end of the first quarter.

The Panthers continued to battle. They began the quarter with a pair of Tahlia Steinbeck free throws. Ali Vaughn followed with a basket and Alex Beveridge made three free throws after she was fouled behind the arc. It was 19-14 with a little over a minute gone by in the second.

That was the closest Hershey could get. The Bulldogs went on a 13-0 run during the next three minutes to distance themselves. At halftime, Bridgeport led 40-20.

The Bulldogs showed little mercy in the second half as their lead grew exponentially. They continued to press well into the fourth quarter.

Ruthie Loomis-Goltl stayed on the court the whole time. She scored her last basket to get to 40 in the final seconds of the game against Hershey’s reserves.

“We didn’t want those little spurts to go on to happen,” Lowther said. “They happened. That’s why they’re the No. 1 team in the state.”

It was the third straight SPVA tournament win for Bridgeport. They defeated the Panthers in the finals two years ago and St. Pat’s last year.

The two teams will play again in Hershey on Jan. 27.

“We’ll see them again in a few days,” Lowther said. “Hopefully, we’ll have a good week of practice and we can change things up a little bit.”