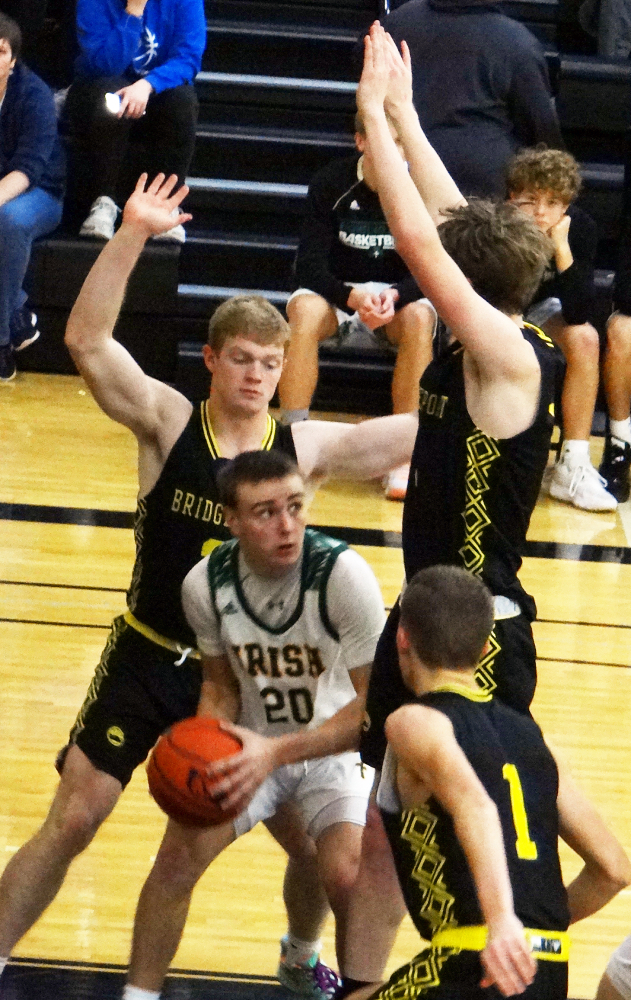 Sam Troshynski of St. Pat's looks to go up to the hoop against the Bridgeport trio of Kason Loomis, Bohdi Dowse and Kolby Lussetto in the third quarter.

North Platte St. Pat’s wasted no time establishing a lead over Bridgeport and they never looked back for a 64-31 win on Saturday in the championship game of the South Platte Valley Association tournament.

The tournament was played at the McDonald-Belton Gymnasium.

“Defensively, the effort was great,” St. Pat’s coach Bill O’Malley said after the game. “We did a good job of guarding the ball and forcing it off the three-point line because they have a lot of great shooters. Offensively, we did a good job of attacking the lane off the dribble and post entries.”

The game began with Will Moats getting a three-point play for St. Pat’s (14-2). Brecken Erickson then scored the next two baskets to make it a 7-0 lead.

The Irish stretched the lead to double digits at 14-3 when Andrew Brosius made a three-pointer that followed a Sam Troshynski bucket. It became 17-3 with a three-point play by Erickson.

“I think the start was largely due to the kids’ effort of keeping the ball away from the three-point line and making it difficult to get it to their shooters,” O’Malley said.

Bridgeport (9-5) scored the last three points of the first quarter from the free throw line. Nik Weibert made one of the foul shots. Gage Nein was fouled on a three attempt at the buzzer and he made two of three from the line to make it 17-6 at the end of the period.

But St. Pat’s didn’t let the Bulldogs gain any momentum. Zarek Branch scored the first bucket of the second quarter; Brosius hit another three and Moats banked one home to make it 24-6.

There wasn’t much Bridgeport could do to get back in the game after that. They couldn’t put together a run against the Irish’s stifling defense.

The Bulldogs fought to be down 32-17 at halftime but the lead kept growing in the second half. St. Pat’s led 48-22 and they cruised in the fourth quarter to their third straight SPVA tournament championship.

The Irish won it similar fashion as last year when they blew out Bridgeport, 73-41.

“I made that point to the guys, you never want to have any level of complacency,” O’Malley said. “I hope they appreciate that they’ve been part of a special opportunity here. It’s due to their efforts, obviously, but it’s a neat deal to get it.”