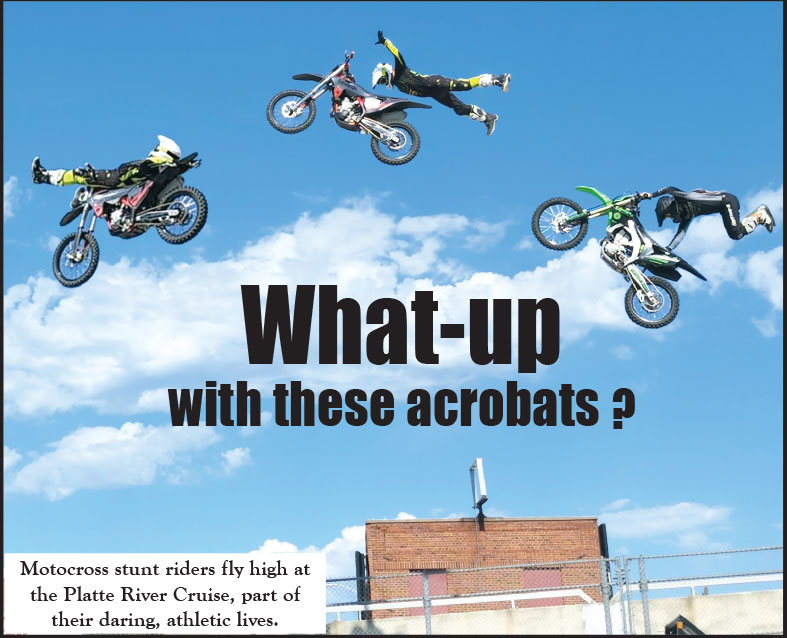 Stunt performer Scotty “Scrub” Miller brought a new style of acrobatics with his crew to the Platte River Cruise on July 8-9.

Cheers of excitement drew a larger crowd each time as the riders interacted with the crowd and gave them the spectacular jumps they wanted. Crowd goers could enjoy free popsicles donated by TK Welding and catch some sun under a tent provided by sponsor Mike’s ATV.

Scrub was born in Council Bluffs, Iowa, and still calls it his home. He started living on his own at age 14.
He spent many hours practicing and racing while working to pay his bills. Now he travels most of the year. He completed a 19-week tour from January-March with The Monster Jam series.

Scrub started racing in 2003 on a Kawasaki 80 and raced until an accident in late 2019 when he seriously injured his knee. He underwent surgery and eight months of physical therapy.

Racing on hard compacted dirt tracks strains the knees, taking the impact of landing. So Scrub got creative with physical therapy and started mastering the jumps and landing on a large air bag for less impact on his knees.

In 2020, it became clear that he was more skilled in stunts and tricks than racing.

He is passionate to keep his audience engaged while performing.

Scrub has worked diligently to perfect the tricks. He is the only trick rider in the world to jump and perform stunts on a Harley motorcycle.

He taught himself to weld so he could build the ramps used in performances. He prides himself in his “HD freestyle” segment of the show.

The North Platte crowd went crazy with applause and cheers Saturday evening after he rode thru three walls of fire in a performance he called “The Fiery Finale.” But that’s nothing. Scrub hopes to set a world record on Aug. 18 in his hometown of Council Bluffs by breaking thru 15 firewalls. His personal best is 13 firewalls, which he’s done privately.

Logan Allen of Council Bluffs, Iowa is the younger of the two riders at the age of 17. Allen started racing a few years ago, not too long after he watched his first race in 2016 at the Mid-America Center in Council Bluffs.

There is so much cost involved in racing besides entry fees like, race fuel, safety gear such as chest protectors, boots, and neck rolls. The bikes themselves can cost a minimum of $6,000 plus parts.

Logan found trick riding to be more fun and a bit less costly than racing, and has now made a career out of doing what he loves. Logan performed his signature stunt, The Lazy Logan, in North Platte, generating gasps from the audience.

North Platte racer Holdyn Fhuere had the opportunity to try his hand in the freestyle jumps.

“As a race family, we know all too well that crashing is part of the racing,” Holdyn said, and he did crash during one of the practices but knew he had to get back on or it would always live in his head.

Holdyn is the second generation to race motocross. Sam Fhuere, who has lived in the North Platte area for most of his life, goes by ManSam. He started his racing career at the age 8.

ManSam raced in neighboring states at that time in the Cornhusker Motocross Circuit (CMC). He had some professional training and his career flourished, leading to races on a much larger scale. In 1995, he raced in Las Vegas and placed second in The World Mini. ManSam then traveled to races across the U.S., from New York to California and everywhere in between. He became the first racer to get a pardon and received his Pro Card two years earlier than the norm, due to his ability and experience.

In college, ManSam met a woman named Sam Brown, who was no stranger to dirt bikes as she had many of the same friends who raced. Later she became Mrs. Sam Fhuere, now known by many as GirlSam.

In more recent years, ManSam has been forced to stop racing on the Nebraska Cornhusker Motocross circuit, NCMA, due to an injury to his arm that left him with limited mobility.

These days, Sam races vicariously through his son Holdyn. Holdyn has raced since age 3. He started on a 2007 TTR 50 and now races a 2021 Kawasaki 250 in the Nebraska Cornhusker Motocross Association (NCMA) circuit. That is same bike he used during the Platte River Cruise in North Platte, where he jumped with trick riders for the first time.

Holdyn has raced at faraway tracks in Oklahoma, Texas, Colorado, Utah and Louisiana. He hopes to bring more participants and creditability to the sport and feels that it is indeed one of the most physically demanding sports. He hopes that it will be recognized as such by everyone, to give the sport the recognition and respect that it deserves, even if it is not facilitated through the schools.

He has seen firsthand the effects of being treated differently. If he has to leave during school hours for a weekend race it is considered an unexcused absence. But if the football team does the same, it is excused.

Scotty, Logan and Holdyn said the proper technique is important, no matter where they perform. But there are also many unpredictable elements, such as the wind.

When a jumper takes off, they plan for the landing before leaving the ground, but then a gust of wind comes along and they have to adjust and compensate while in the air. If they are unprepared for the unexpected, they will crash and “That hurts, baby.”

All three riders jump high as high as 75 feet or so – about the same distance between the take-off ramp and the airbag that they land on.

Scrub jumped a heavier Harley, an 883 Harley Sportster weighing about 700 pounds. By comparison, the weight of a large dirt bike is far less, about 270 pounds.

When jumping on the Harley, the distance between the ramp and the airbag is reduced to 52 feet. Scotty plans to build his skill and confidence in the Harley jumps and increase the distance to 60 feet.

The team is brainstorming a return next year to North Platte, with maybe a little back-flip action added to the show.

Sam Fhuere tried four times previously to start some motocross racing in North Platte, but met with reluctance and resistance, and was unsuccessful.

This time, he and his family brought motocross stunt riding to North Platte during the Platte River Cruise, and made it a success, thanks to the efforts and talent of Scotty “Scrub” Miller and his cohorts, and many contributing sponsors.

Supporters encourage you to come out to see them next year and show your appreciation to ManSam – Mr. Sam Fhuere.

This article was published first in the Bulletin’s July 13 print edition. Photos by Alisha Mayo. Tap to enlarge.