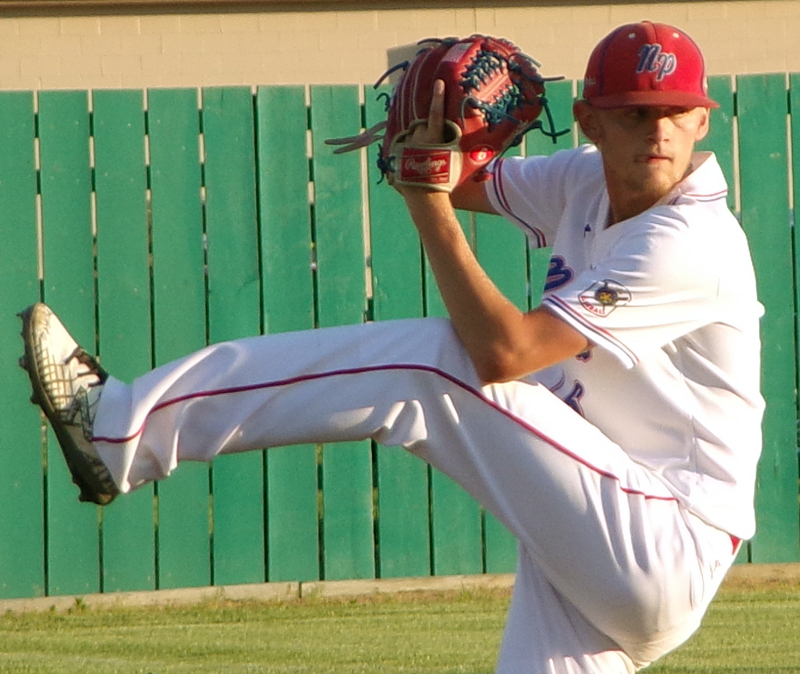 Will Coe winds up for a pitch in the third inning.

Seniors hold on against Hastings

The North Platte FNBO Seniors collected only three hits on Tuesday against Hastings.

But that was enough for the Nationals to defeat their district rival, 5-3, at Bill Wood Field.

“The thing I liked is our situational at bats,” Seniors coach Ricky Holm said. “The outcomes weren’t there, we only had three hits. But I could tell a lot of guys were thinking situationally and they had good approaches out there. We had some timely hits today. It wasn’t the best as far as hits go but I thought it was the smartest game we played in the box.”

Hastings took the lead in the first inning on a sacrifice bunt by Justin Musgrave.

But in the bottom of the first, North Platte (13-2) tied the game when Brayden Mackey made a wild pitch. Then they took the lead when Carter Kelley hit a two-run single up the middle.

The score was still 3-1 when Kelley next stepped up to the plate in the third and he slammed Mackey’s pitch to center field. The only thing that kept it in the park was a 20 mile-per-hour wind, yet it was deep enough to get past Macrae Huyser and score two more runs to make it a four-run game.

North Platte was able to get to Mackey by taking him deep in the count, something they weren’t able to do in their 4-3 loss at Hastings a week earlier. On Tuesday, Mackey reached his limit after four innings.

“There’s always the risk that even though we’ve seen him before and we know what he’s got, he’s also seen us and he knows what we’ve got,” Holm said. “It was just good we were able to work him deep into the count and getting to the bullpen. I was pleased with that.”

In the fifth, Hastings pulled to within three when Luke Brooks singled up the middle. But Nationals pitcher Will Coe got out of the inning and he turned it over to Mason Tilford in the sixth.

Tilford held Hastings scoreless in the sixth. But in the seventh, he walked the first two batters, Gabe Conant and Huyser.

He was relieved by Derrick Kuhlmann. The hard-throwing Kuhlmann struck out Treyton Newman for the first out but then he hit Musgrave to load the bases.

Kuhlmann struck out Brooks for the second out. But on the payoff pitch against Kaden Evans, he missed high and Hastings scored a run.

But Kuhlmann regrouped, throwing three fastballs down the middle and Tyson LeBar struck out looking to end the game.

Kuhlmann has been used by Holm as a closer for the Nationals despite not pitching in his Legion career before this year.

“The first day I saw him throwing, I asked him if he pitched and he said he hadn’t,” Holm said. “I said his arm worked to well not to be pitching. He’s still got a lot of work to go but he throws real hard and a lot of time, that’s going to work.”

Normally in Legion, a team just has to throw whoever has the freshest arm. But this year, North Platte is so deep they have the luxury of designating players, like Kuhlmann and Tilford, to come in from the bullpen late like a college or pro team.

“Both of those last guys, Derrick and Mason, have a really good mentality,” Holm said. “They’re the types of guys I can trust with the bases loaded to not let the situation overwhelm them and as the season goes along, I’m seeing more guys get that mentality and I’m excited about that.”

It was North Platte’s first win over Hastings since their opening game of the 2016 district tournament when Jayden Kruse threw a nine inning complete game shutout.

Next, the Nationals will host a doubleheader against Twin Cities on Wednesday.