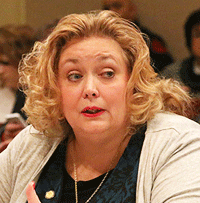 Sen. Carol Blood of Bellevue said Wednesday that her office has helped hundreds of Nebraska residents with problematic unemployment claims, and it has become clear that a significant amount of problems are the result of cybercrimes.

Blood said the state of Nebraska has been paying fraudulent claims.

She said cybercrime gangs have been sharing “cheat sheets” on the internet showing that Nebraska has been vulnerable and paid out substantial amounts over an extended period.

After discussing the issue, Sens. Blood and Jen Day of Omaha submitted a formal request for information to John Albin, the Director of the Nebraska Department of Labor, and to Nebraska Attorney General Doug Peterson.

The most recent COVID-19 stimulus package, the American Rescue Plan, provides a second surge of funds to states and Blood and Day are concerned that this will, again, make Nebraska a target for the skilled cybercriminals that are well organized.

Additionally, fake websites have been created to look like unemployment claim sites but are really sites where scammers steal personal information that is used to steal benefits, or worse.

“We feel we owe it to Nebraskans to get in front of this issue and tackle this before the next surge makes the issue even more problematic, ” Blood and Day said. “Ultimately, this is taxpayer dollars, and we want to know that Nebraska agencies are combating this issue and recouping the funds to the best of their ability and holding the criminals accountable.”

Blood said technology has opened the door to more creative crimes and “these criminals tend to scatter like cockroaches when you lift the rock to expose them.”

She urges state officials to figure out a solution to combat the problem.

A December 2020 Nebraska State Auditor’s report showed that Nebraska has been paying fraudulent claims, but the total amount of fraud remains unclear, because only a portion of the high-risk claims were audited, Blood said.