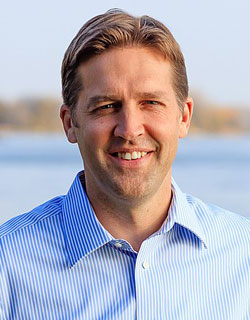 Sasse, one of youngest senators Nebraska has ever had, often criticized President Trump and voted for his impeachment, but Sasse voted conservative. On issues before Congress, he agreed with Trump about 85% of the time.

Speaking on the Senate floor, Sasse said it’s been a stormy, up-and-down relationship with voters, who he thanked for electing him to the job he held for eight years.

He said “Nebraskans and me” have wrestled.

“Many times, it felt like a noogie, a slap, a head butt and a hug all at once,” he said.

Sasse thanked his wife and children and described some things his children have learned about the Capitol, our founding principles, U.S. history and Nebraska agriculture.

“Breck, our youngest, got to feed 2000-pound bulls with names like Petrone. He got to bring home stray dogs and ranch animals, with or without permission. He got to live off of an RV for about 16 months, which I will now confess, given that there probably is less regulatory reach, that we probably violated a good bit of code on that RV.”

“Alex, our middle daughter, has given so many tours of this Capitol, and she knows the stories of our country and the tributes etched and strewn throughout this building to people who preserved a republic. These are experiences that bore a hole in her soul as she grew. And though she knows that America is imperfect, she knows to never take it for granted,” he said.

“Corrie, our eldest, had a chance just this last summer to join me at the Polish-Ukrainian border, joining groups who were visiting soldiers in hospitals who’d given their limbs to defend their homes, coloring and drawing pictures with orphans whose parents won’t come back because of an evil man who thinks he can seize land that is not his.”

Sasse said he and wife Melissa understood from day 1 on the campaign bus in 2013 they would never plan to spend a lifetime in Washington.

Long term politicians are “not what our founders envisioned for the people they would send to the federal city,” he said. “They envisioned, rather, congressmen, senators, and presidents who thought of D.C. as a temporary stay. Washington is a place to do a good bit of neighbor loving work, but then go back home to the more permanent work of life and flesh and blood whole communities.”

Then Sasse talked about the dramatic lack of faith in political leaders and the future of our country, and those who would think the solution to partisan bickering is to increase the size and scope of government.

He said more centralization of political power would be silly and foolhardy.

Political factions are dangerous, he said, “but here’s what we fail to appreciate most of the time — they are factions and they’re small.”

“They command nowhere near a majority opinion. This is good news.”

“Whether they stand on my side of the aisle or the other side of the aisle when they yell, the political addicts who prize short-term power over long-term dignity and liberty are the ones who now dominate the nation’s conversation and their story is roughly symmetrical.”

“So let’s restate this overreach and repulsion hypothesis in a more positive way, because it turns out the American people are quite ahead of the political classes.”

Sasse said getting off a good political zinger “might feel good temporarily — a little dopamine hit to fire off a clever tweet or get booked on a supposedly prime slot — but honestly, almost nobody’s watching and the share is getting smaller.”

“Run the numbers,” he said. “99% of political tweets come from 5.5% of Americans. The primetime lineups of the three biggest cable networks almost never hit 2% of the public.”

“We know that politics won’t save us, but that doesn’t mean that we’re hopeless; it just means that we know what’s best about America comes from outside the centers of power, same as it ever was. We need to regain our bearings and to recall our original construction and our architecture.”

“We need Americans to be confident about self-governance for men and women who’ve been given a republic to hold.”

Sasse said “Recovery requires investment in things that outlast partisan preference. We must steward the present age and play our small but vital part in the work of self-government. Because yes, policy matters, and yes, there must be important and vigorous debate. And no, being polite for the sake of being inoffensive isn’t the highest good and, no, mushy middle kumbaya-ism will not be a strategy, but more than debates about policy, we need Americans to believe they can build again. We need to believe that loving your neighbor is more important than the policy disagreements.”

Sasse will officially assume the presidency of the University of Florida on Feb. 6.